The time frame is from June 1972 to September 1972 when Al the Owl stationed himself aboard USS Somers DDG-34. I was in the Navy and my ship had been fighting on the DMZ (Demilitarized Zone) in Vietnam when a Typhoon developed and headed our way. Somers broke off the enemy engagement and headed out to sea to ride out Typhoon Nina.

There were heavy seas and high winds and I was standing Roving Patrol watch and carried a side arm when I noticed a commotion on the deck directly above my work space. It was my duty to protect myself and fellow shipmates from any harm and climbed up to investigate. What I found was a group of sailors trying to kill a little bird. I placed myself between the little bird and the sailors and said that you will have go through me before I let you try and get at this little bird again. Al the owl had ridden the typhoon far out to sea, and at approximately 17°N and 109°E sought refuge on our Tin Can.

I sent a buddy of mine to find a Navy blanket and when he came back up, grabbed up Al the Owl inside the blanket and took him below to safety and put him and the Navy blanket inside a cardboard box and closed the lids. I put a little water dish inside the box with a little food but Al would not drink or eat and was quite nervous about the whole ordeal.

When I was a pre-teen I used to catch wild lizards and keep them as pets but at first they did not like to drink or eat either so I developed my own force feeding and drinking system to keep them alive until they became tame. I used the same tricks on Al and would hold him tight and when tapping a toothpick on his beak, he would open up his mouth in protest when I would shove little pieces of raw hamburger and raw chicken down his throat. To give him water I used an eye dropper using the same technique.

After a couple of weeks Al started eating and drinking on his own and we became quite attached to each other. Al loved to hide inside my shirt when I went to the bathroom, the mess deck, my combat general quarters station and went everywhere else that I did aboard ship. Al the Owl gave us courage when we saw how brave and diminutive he was. Al the Owl used to help me fix electronics by pooping on the spare parts. When I had Al with me we went to the front of the chow line together. 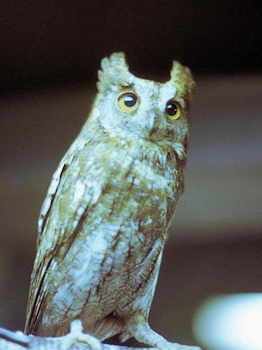 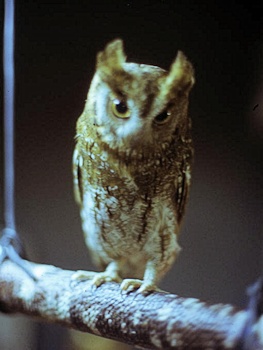 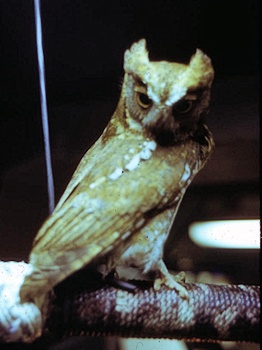 I told everyone to keep quiet about Al because I think it is illegal to have a live animal aboard ship during combat operations. Asking a sailor to keep a secret is like asking a woman to keep a secret and word got out fleet wide. One day in the Gulf of Tonkin an Admiral rode a helicopter to the ship and I did not think anything of it until he was knocking on my door. The Admiral gave us congrats for the work we had been doing and then wanted to see the owl. I was caught aback and said nothing. He asked again to see the owl and I said "Sir, look above your head". The Admiral looked up and grew wide eyed to see Al the Owl staring down at him in an unfriendly manner. The Admiral said "I thought it would be a stuffed owl" and left in a hurry.

When the ship pulled into Hong Kong harbor for R&R, I released Al after a small ceremony attended by Officers and Enlisted men. Al the Owl flew off toward Hong Kong and that was the last we ever saw of him.

Note from The Owl Pages: we believe that Al was an Oriental Scops Owl Otus sunia.