On 6th of December, 2015, I along with Devrat Mori (Surendranagar), Ankit Shah (Ahmedabad) and Dr Meet Agrawal (Ahmedabad) were searching for a resident pair of Barn Owls (Tyto alba) near a concrete overhead water-tank in a temple premises near Wadhwan, Surendranagar, Gujarat [India] with the help of a torch.

After searching for a while we didn't sight the Barn Owls, maybe they were hunting in nearby fields. On the way back we had observed some movement in a Neem Tree (Azadirachta indica). Upon checking towards the movement with the torch, we found 2 Spotted Owlets (Athene brama) sitting on different branches of the tree. On detailed observation, we found one of the owlets had a cataract in the left eye, and was holding some prey perched on a branch. 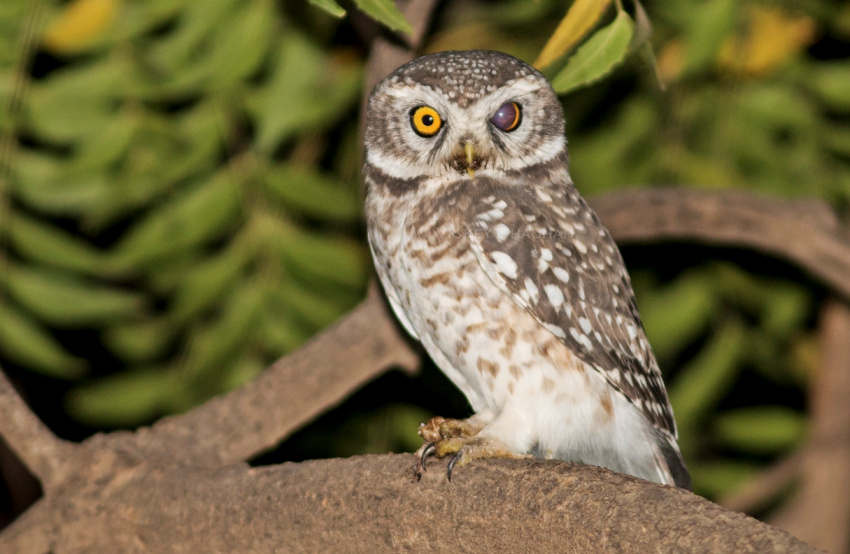 A Cataract is a clouding of the lens in the eye leading to a decrease in vision. Often it develops slowly and gradually covers whole eye. If not cured well in time, vision in the eye might be lost forever.

I have no idea how common this disease is in owls. This Spotted Owlet may find it difficult to hunt with the cataract in its eye, though it was seen holding prey in claw. Looking at the beak/mouth of the owlet it looks that something has been freshly eaten by it, evidenced by holding some prey in its claws.

We didn't observed any hunting/flying activity by the individual.