Qatar is a small country, a peninsular positioned on the west of Saudi Arabia and faces into the warm waters of the Arabian Gulf. Not somewhere at first glance you might expect to find an abundance of birds of any kind as summer temperatures soar to 50 degrees Celsius and above.

I am out early, the sun just pushing up over the desert horizon. The landscape away from the gigantic chrome and steel palaces of the capital city, Doha, is seems to have been bleached white by the relentless sun, the local stone littering a largely blank and featureless desert with just a thin scattering of thorn bushes breaking up the hot, dry plain. I'd driven 50 kilometres out of Doha, heading due west toward the Saudi border. I turned off the highway and headed down a rough track that weaves due south toward a looming cement factory.

Since the 2017 blockade, Qatar has been forced to strengthen food security. Today large herds of cattle are accommodated inside vast air conditioned farms, the cows led to gigantic automated milking units twice a day. All these cows need food however, and the farm where the majority of their fodder is grown is just in front of me as I drive slowly inside the farm gate. 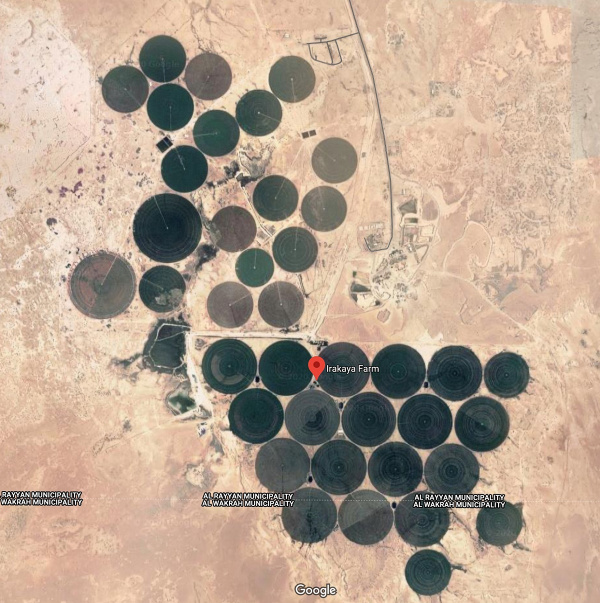 Vast circular fields stretch with geometric precision across the landscape, each huge disc an unfamiliar green against the blankness of the surrounding desert. The secret to this verdancy are the massive irrigation booms which trundle slowly in a matching circular arc over each field. Each boom is anchored to a reservoir in the centre of the field and their slowly revolving paths brings the farm to life. Grasshoppers and other insects including butterflies flitter over the swaying grasses and I'm immediately presented with the sight of a Pallid Harrier quartering across fields that have suddenly assumed the character of a steppe.

This is Irakaya Farm, a place I have become very familiar with during my time in Qatar. It can be a very productive birding location between the months of November and April each year. During this period, temperatures drop and many migrating birds drop into the farm, many staying for several weeks.

With just three weeks to go until my return to the UK, I was early in order to scout for Little Owls. Remarkably, these birds manage to persist in Qatar all year and I'd read reports of these charismatic birds being sighted on the farm, although no specific location had been mentioned.

I drive slowly around the perimeter of the farm, searching for a likely location when I spot a pile of rubble, presumably having been cleared from the fields. Carefully, I drive closer and then I see them. Three small hand shaped silhouettes poking out of the rocks. 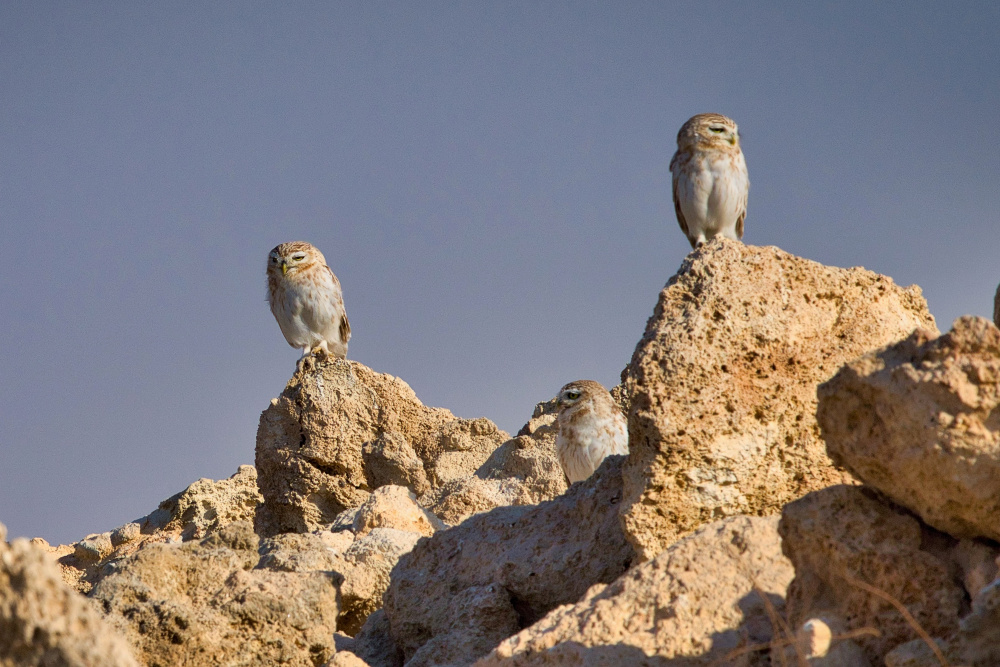 I squeeze off a few long distance shots, noting the pale plumage and consult my Middle East Bird app. The birds are described as Lilith Owls. They are much paler than the Little Owls I'm used to seeing in the UK and are about 20cm long. Their plumage is a light, sandy-grey colour with sparse, very light buff coloured streaks on their chest. They have the striking yellow eyes of the breed and although by now it is well past dawn, they stand together in a small group. 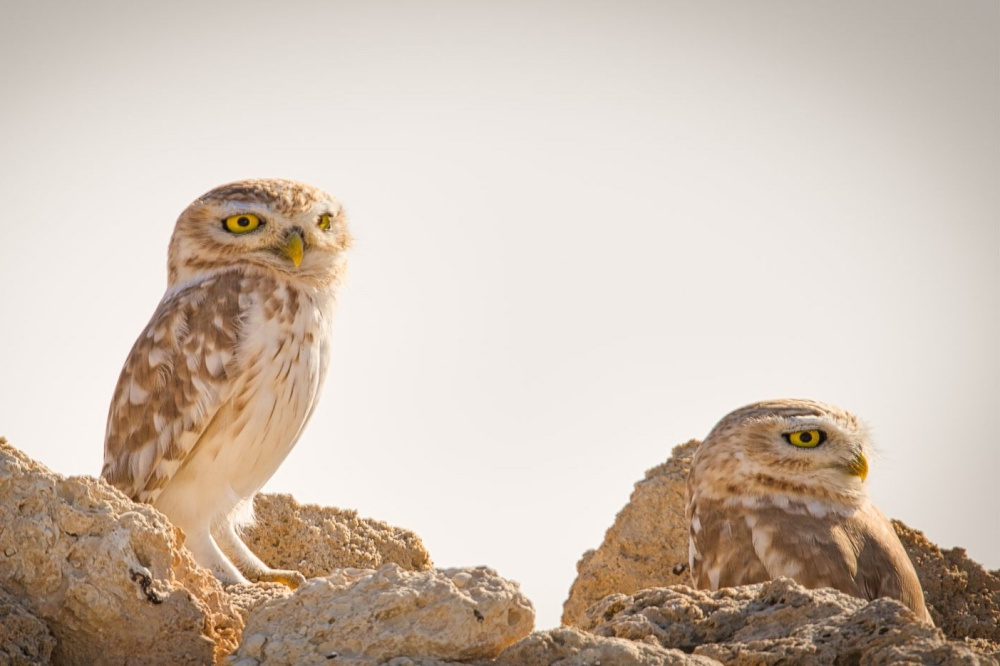 I keep my distance and train my telephoto lens on them and am rewarded with some beautiful close ups photos and some video. I note the pale cream coloured eye patches, making them look almost spectacled. The birds appear to be watching the fields behind me, their heads swivelling first one way then the other. I remain close by, hardly daring to move. It's such a golden moment. 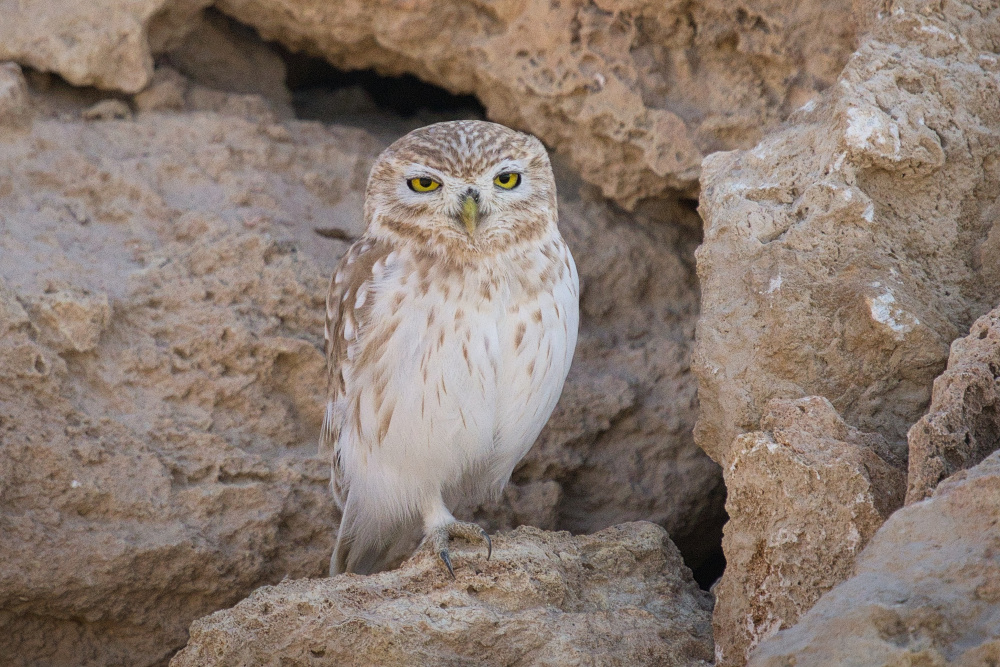 Finally, one of the birds flies off and the other two disappear inside the rocks. The spell is broken and I reflect on my good luck. It was a privilege to have spent time with such beautiful birds.