A Review of accounts of luminosity in Barn Owls Tyto alba

The historical anecdotal accounts of luminosity in the Barn Owl Tyto alba, in England and Australia, are reviewed and found to be convincing. There are many eyewitness accounts of unexplained lights behaving like hunting Barn Owls, and some of those lights were seen ultimately to be luminescing Barn Owls. This phenomenon may be a plausible explanation for the Will o' the Wisp and similar myths in England, and the Min Min Light in Australia.

The cause of the luminescence is more contentious. Contamination of the owl's feathers by luminescent fungi, from decaying wood within tree hollows, is here considered to be an unlikely cause. Instead, it is proposed that the Barn Owl may be intrinsically bioluminescent. However, this hypothesis requires scientific investigation.

There is some evidence that phenomena such as the Will o' the Wisp in England and Min Min Light in Australia are luminescing Barn Owls Tyto alba (e.g. Purdy 1908; Gurney 1908; McAtee 1947; Bunn et at 1982; Macnamara 1989). However, the source of the luminescence is yet to be resolved. The most common explanation for such luminescence is that the owls have become contaminated with luminous fungi that grow inside hollow trees (e.g. Bunn et al. 1982) although, for reasons discussed herein, that explanation is unsatisfactory.

Bioluminescence, the emission of light from living organisms, is found mostly in sea fauna, in some bacteria and fungi and in a few insect and earthworm species. Bioluminescence is odd in its distribution in that there may be forms or strains of the possessor, or closely related species, in which the luminosity is not found (Harvey 1920).

Is there any reason why birds could not bioluminesce? In a private letter Peter J. Herring, editor of Bioluminescence in Action (Academic Press, London 1978) said, 'There is no fundamental reason why there should not he a self-luminous bird (or mammal or reptile) but none has been reported'. Phosphorescence has been reported in skunks (Corliss 1981); old reports of luminescent organs in a lizard have have discounted (Roth & Gans 1960). Bioluminescence in birds, as opposed to iridescence, has never been proven to exist. Nevertheless, the existence of luminosity of some kind in barn owls Tyto Alba is supported by many historical accounts, and periodically there is renewed interest in this phenomenon (e.g. Toms 1996). 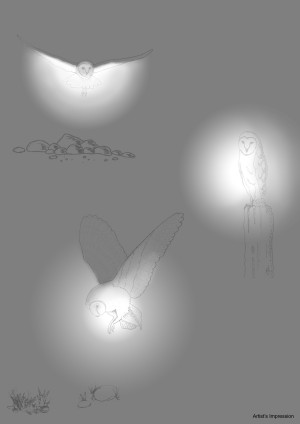 Only the Barn Owl is considered in this paper, because all the evidence gathered points to that species, and luminescence has been confused with iridescence in the few reports (in Corliss 1981) concerning other birds.

[At this point a misconception regarding the former scientific name for the Barn Owl, Strix flammea, must be corrected. Much has been made of flammea supposedly indicating that the Barn Owl's luminescence has long been recognised scientifically. In Latin 'flammea' means fiery or flaming. However, Strix flammea Linnaeus 1766 was not only preoccupied by Strix flammea Pontoppidan 1763 for the Short-eared Owl (now Asio flammeus), it was wrongly applied. Although describing the Barn Owl accurately, Linnaeus erroneously based his name for it on an illustration, in "Olof Rudbeck's Book of Birds", of the Short-eared Owl which has fiery eyes (M.P Walters in litt.). Therefore, Strix flammea in the present context is irrelevant.]

McAtee (1947) discussed luminosity in birds, and in his annotated references the Barn Owl is mentioned ten times. Purdy (1908) described in detail his experiences with luminescing Barn Owls, and named thirty or so persons in his neighbourhood who had seen luminous owls.

Purdy described his own experiences of seeing lights behaving like hunting Barn Owls, emitting noises like Barn Owl vocalisations, and ultimately being seen to be a pair of Barn Owls, one seen emerging from its roost. In one instance, the light was described as 'slightly reddish in the centre, and resembled a carriage lamp'. Purdy related what he described as the 'best display' yet observed by him and two other witnesses on 19 December 1907:

Its luminosity seemed to have increased and it literally lighted up the branches of the trees as it flew past them. After watching it for about half an hour, it was joined by a companion bird hardly so bright. This kept about a hundred yards behind it, but not constantly.

'A Country Teacher' (Anon. 1907, also cited by Gurney 1908) told of luminescing birds. After first seeing them the teacher mentioned the fact to his pupils, and found that several of the children knew of them as a 'gum allurt'. On making enquires he learnt from teachers in other parts of Shropshire that their pupils 'knew both the term and the thing'. He found the roosting place of the birds, which were Barn Owls, in a barn about a hundred metres from the school and kept them under observation.

That luminous Barn Owls have been seen before in the same part of Norfolk is certain... We have it on the best authority - namely, from the man himself - that some years ago Frederick Rolfe, gamekeeper now retired, saw what could have been nothing else when stopping up fox-earths at West Bilney. A few nights afterwards he saw the same shining bird again, subsequently shot it, and found that it was a Barn Owl. He said that the bird 'was emitting a very bright light when near him and that it continued to give out a slight glow for some hours after it was dead'.

The light at its brightest was about as brilliant as the light of a bicycle lamp from three to four hundred yards away and that was what Mr Purdy at first took it for. Anyhow, the light does not seem to have had the effect of giving warning to rats and mice, for Mr Hammond's bailiff saw it drop on one and heard the little animal shriek. On one occasion the shining bird was quietly seated on a gate, and another time on the ground, having probably just dropped in pursuit of a mouse.

Dobbs (1911) gave an account of moving lights assumed to be owls. She described the lights as a reddish yellow, like the oil lamp on a bicycle or carriage and as strong, though a shade redder; they were not the white phosphorescent light expected, and sometimes reflected strongly in the river. She thought that the lights were visible only when moving partly or fully toward the observer, and noted that they seemed to flicker as though crossed by the beats of a bird's wings. One or commonly two lights, exceptionally up to four, were seen.

There is much in the description of their movement and behaviour that suggests foraging Barn Owls, and indeed the local ferryman recognised them as owls. Dobbs saw them most often on damp nights with heavy overcast, but also on clear nights with a half moon; on one occasion she observed them more than two hours after sunset on a dark night.

Moffatt (1911) also quoted the ferryman as seeing them best on moonless nights in damp weather. These conditions would seem to rule out reflection of ambient light.

Although luminous birds, thought to be Barn Owls, have been reported in Spain and South America (McAtee 1947) their existence in rural England, and perhaps Europe, may have been observed much more than realised. I refer to the well-known phenomenon of English folklore, Will o' the Wisp. This mysterious light, about the size of a lantern light, has been known for centuries. It was to be seen bobbing along country lanes, hovering one moment and the next streaking off across fields, rising when necessary to glide over fences and hedgerows, observed following roads that led to cemeteries and sitting on tombstones, striking fear into the hearts of many who saw it, believing it to be an omen of death or evil and given to luring lost wayfarers to their doom in bogs.

The name of the phenomenon might vary from place to place: in one locality it might be Will o' the Wisp, in another Jack 0' Lantern, or Joan of the Wad, Jenny Burn-tail, Kitty wi' the Whisp, Spunkie or Corpse Candle (Clarke 1990).

Anybody seeing this sprite might merely have been seeing, without knowing, a luminescing Barn Owl, at least in some instances.

Jack o' Lanterns were said to fly at and 'baffle' people carrying lights. Anon. (1908) reported that he had an owl flying at and knocking against a lantern he was carrying at night through a churchyard. Perhaps territorial owls mistook lanterns for intruding (luminescing) owls.