Mark believes there is something mystical and magical about owls. Creating something out of a block of wood which people want to touch the feathers to see how soft they are or if they are real seems somewhat magical as well.

He became fascinated in wood carving after seeing a carving of a Saw-Whet Owl in a Gift shop in North Conway, NH where his parents lived. The idea that it was just a piece of wood totally amazed him. His obsession with owls and woodcarving was born at that time.

He lives where the Great Horned and Screech Owls can be heard at night and the Snowy Owls come to visit in the winter.

Mark has been woodcarving since 1992. After winning at a local carving competitions early on, he has not competed for 22 years. Concentrating on his career as a Electronic Prepress Operator in the Graphic Arts and Printing Industry.

He would now like to make career out of woodcarving.

The last couple of years he has worked at Improving his skills through taking seminars, taking part in competition and displaying his work at shows. Working his way up the ranks of the Ward World Championships. Where he has won a number of ribbons over the last few years.

Check out Mark's official Etsy shop. You can also visit Mark's website Obsessed with Owls, or check out his Facebook page. 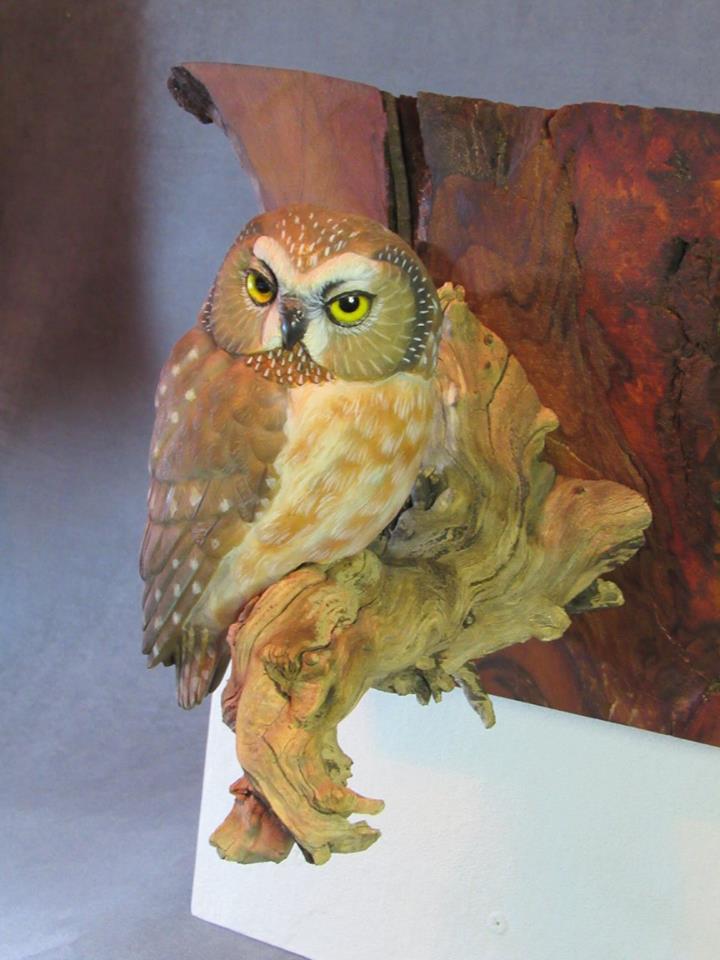 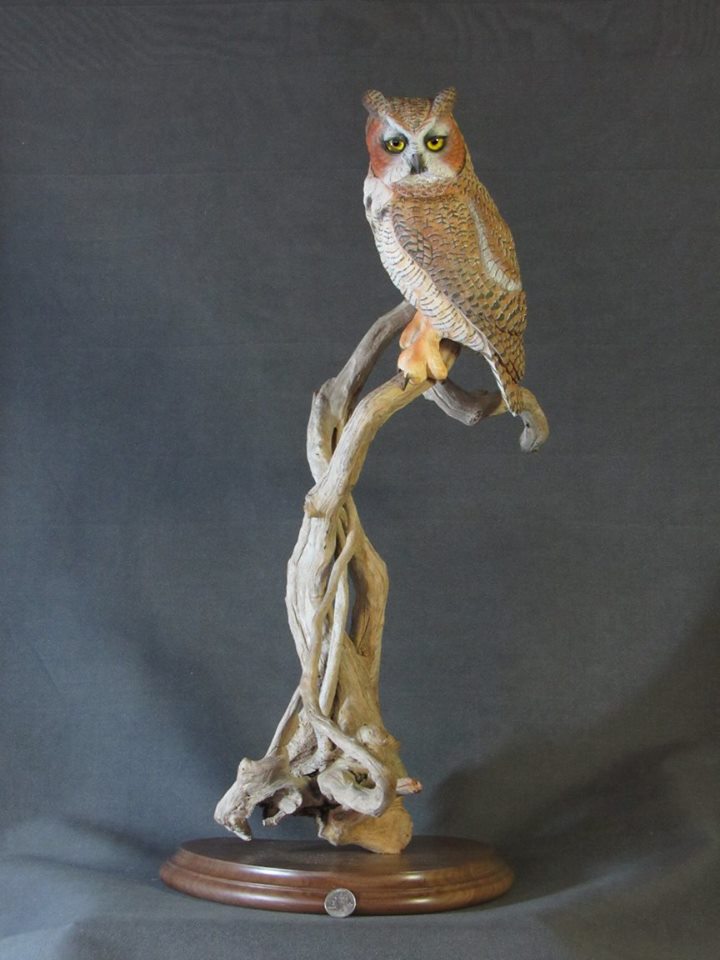 Great Horned Owl (Miniature) "This is one of those pieces of driftwood that when I found I said to myself I must make some kind of carving composition with this. I love the gnarly, twisted, weathered look. My idea for the composition was to turn the root upside down and create a feeling of weightlessness. Fitting the owl to the branch was just one of the elements of this carving, leaning forward ever so slightly to create the illusion of movement, like it's spotted its next meal. I also have it connected to the base by just a simple point, which adds to the feeling of weightlessness." 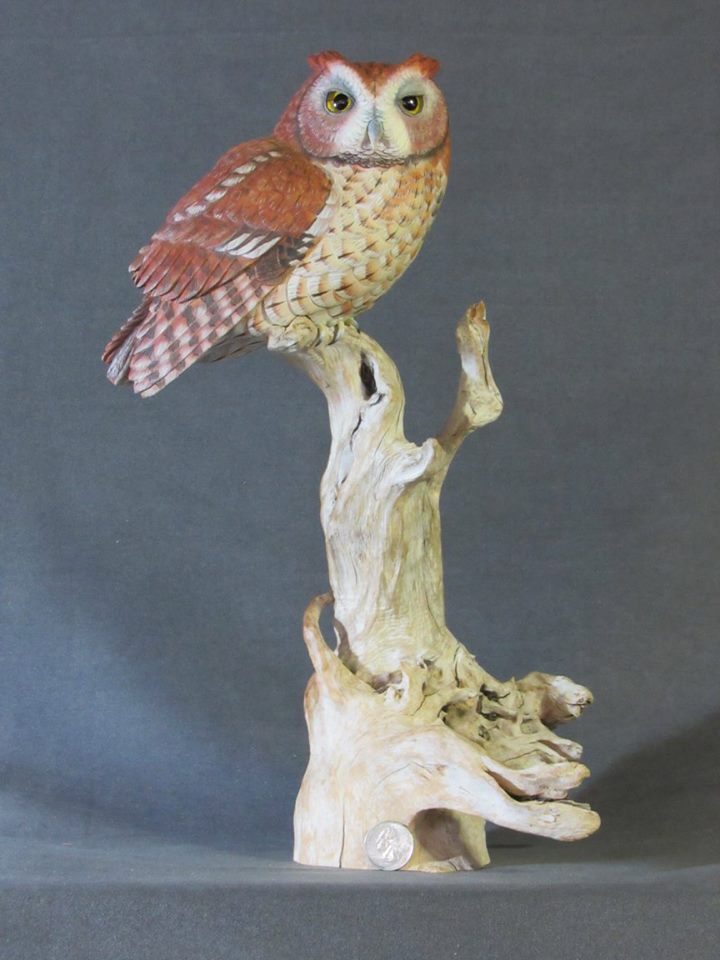 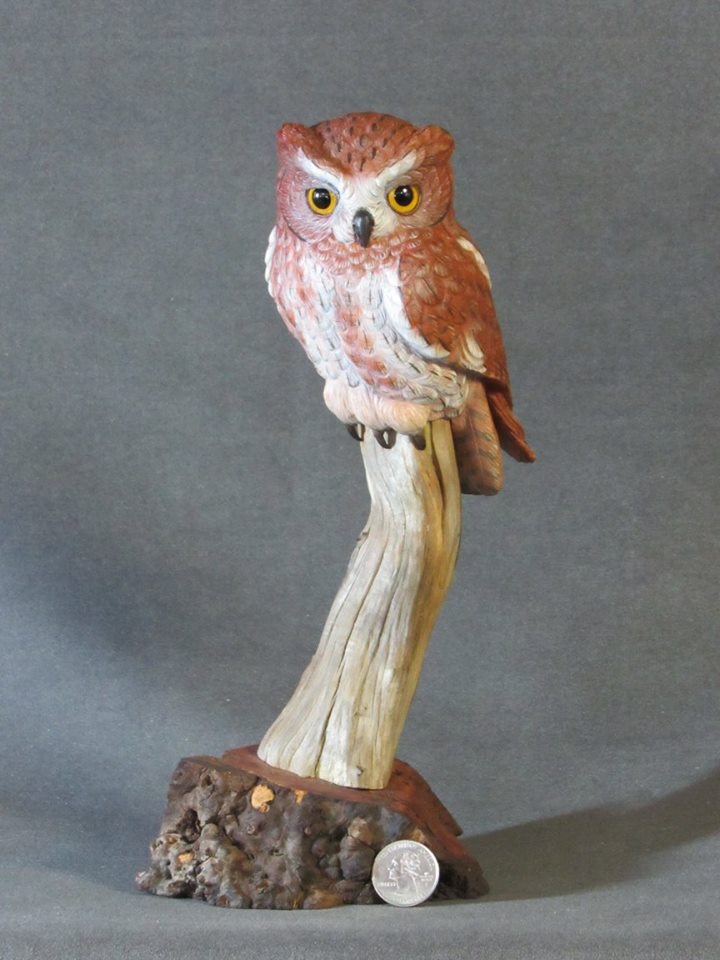 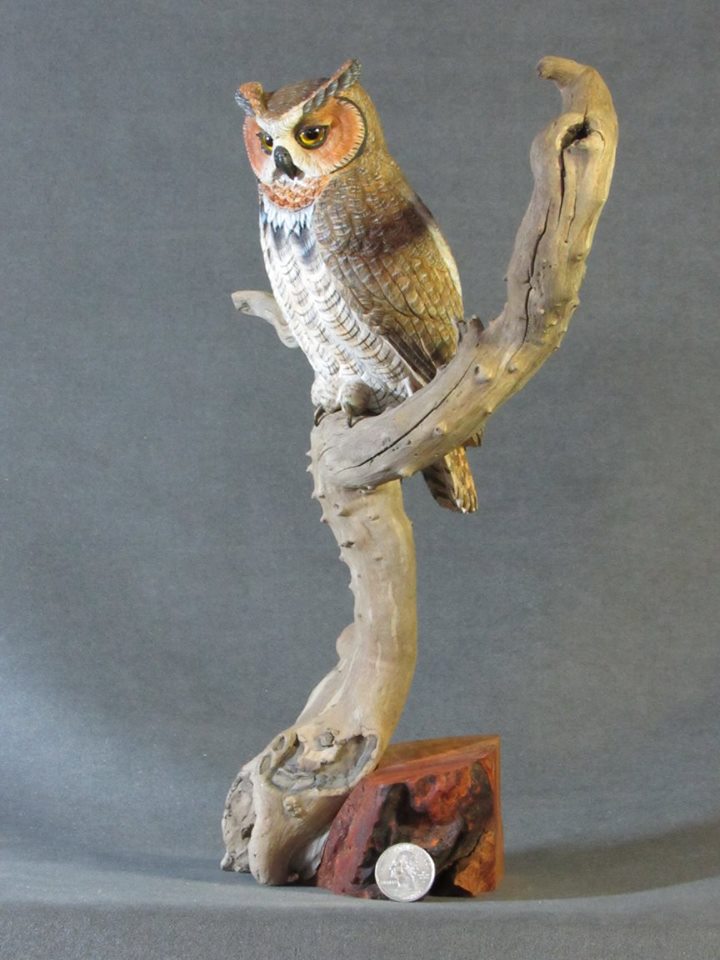 Great Horned Owl (Miniature) On a unique piece of driftwood leaning forward ever so slightly to create the illusion of movement, like it's spotted its next meal. 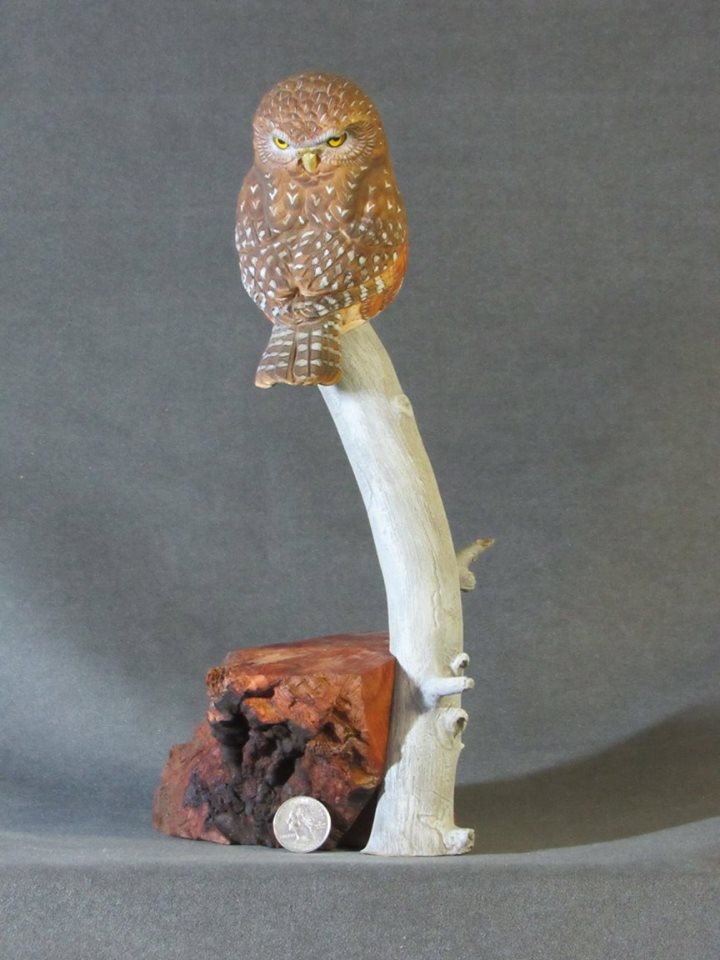 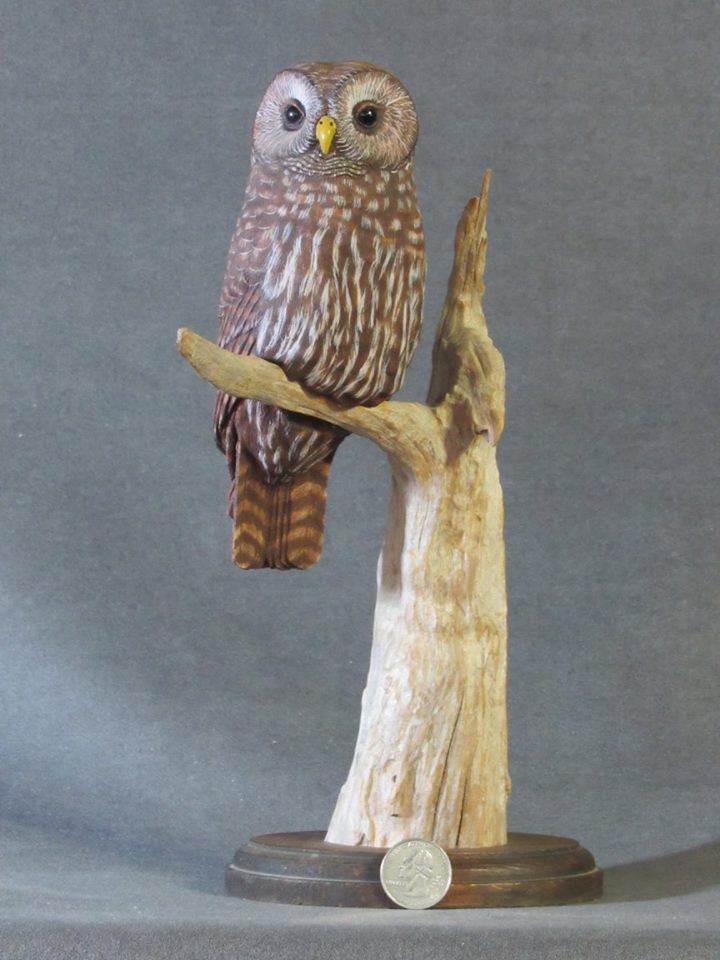 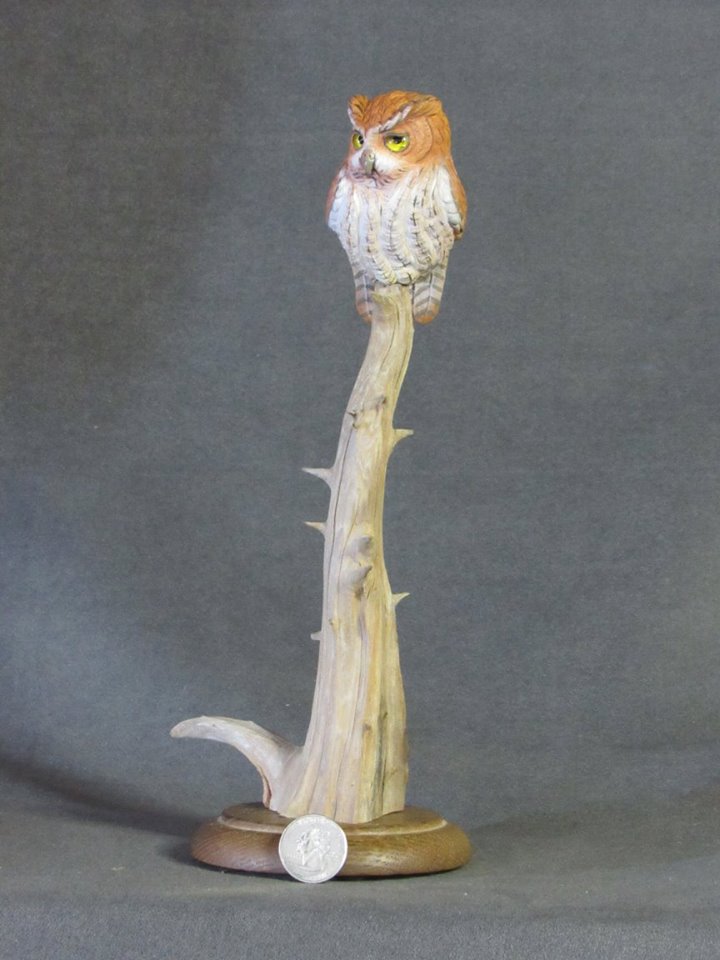 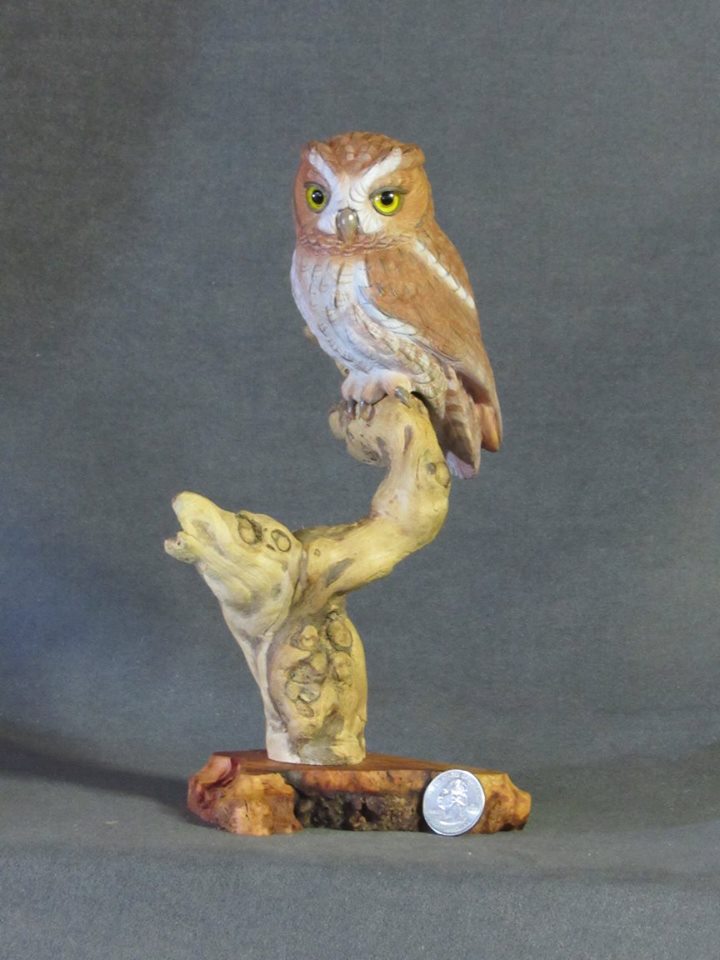