Observations of Owls in Western Democratic Republic of the Congo, With a Note on African Wood Owl Vocalizations

Owls in Western Democratic Republic of the Congo

During 20 August to 15 September 2004, I engaged in an expedition to the Congo River Basin in western Democratic Republic of the Congo. I explored a number of remote forests and stayed in 8 different Bantu and Pygmy villages south of the city of Mbandaka down to Lac Ntumba (Lake Tumba) and up the Ubange and Congo Rivers and some of their tributaries, including Lombobo River, Monioto Channel, Irebu Channel (0° 6.7' to 1° 5.4' S latitude, 17° 45.0' to 18° 16.4' E longitude).

The purpose of the expedition was to assist with community-based forest planning. As part of this objective, I sought owls in a variety of forest and vegetation conditions to determine which owl species may be present in more and less disturbed situations. To aid identification and to solicit responses, I carried a cassette tape with Central African owl sounds from a commercially-available CD set (Chappuis 2000). I also compared observations with the often-scant descriptions of owl vocalizations given in Barrow and Demey (2001), König et al. (1999), and van Perlo (2002).

The following table summarizes my encounters.

Vocalizations of African Wood Owls in the Congo 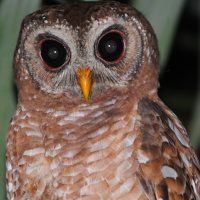 My initial findings are that the songs of this species in the Congo differ significantly from its songs elsewhere in three ways:

These differences are noticeable on the following sound spectrograms of African Wood Owl songs in three geographic areas. These plots show a duration of about 2 seconds on the x axis and a frequency range up to about 2 kHz on the y axis.

The first is an African Wood Owl song I taped in the Congo. This is likely a male, as males may have deeper voices than do females (Delport et al. 2002): 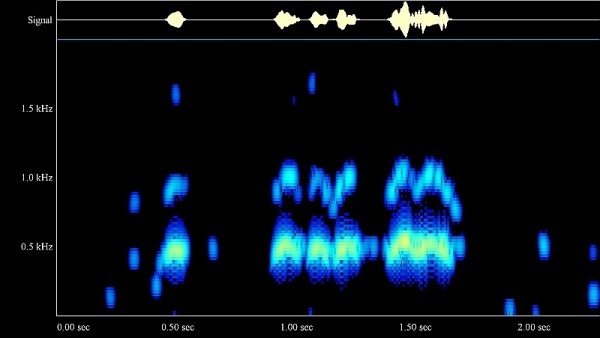 The second is an African Wood Owl song I taped in Victoria National Park in northwestern Zimbabwe (this may be a female, which generally sings at a higher pitch than males, but still note the greater range of frequencies of the main notes of the song): 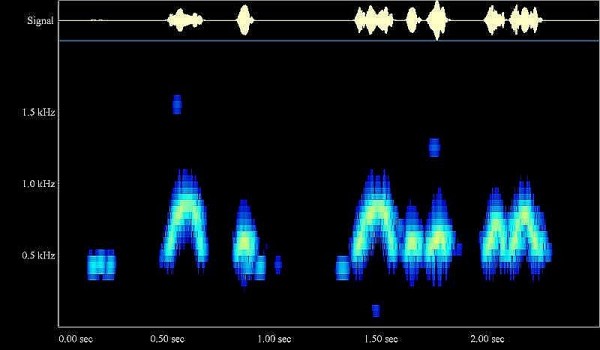 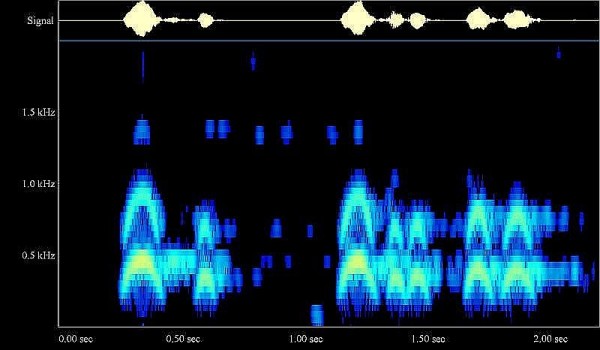 And here is an African Wood Owl song recorded in South Africa (again, probably a male): 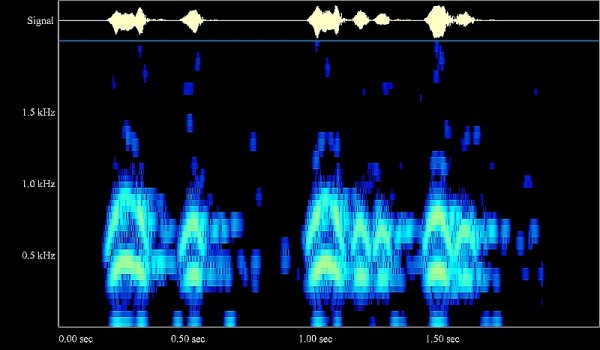 Whether these differences I discovered signal a unique taxonomic entity or just local individual variation of this species has yet to be determined.

Many thanks to my hosts in the Democratic Republic of the Congo for getting me to the remote locations, particularly to Michael Brown and his staff of Innovative Resources Management. My thanks also to the many local villagers who risked the numerous army ant raids in the dark night forests to show me forest trails and some of the owl locations.