Throughout history and across many cultures, people have regarded Owls with fascination and awe. Few other creatures have so many different and contradictory beliefs about them. Owls have been both feared and venerated, despised and admired, considered wise and foolish, and associated with witchcraft and medicine, the weather, birth and death. Speculation about Owls began in earliest folklore, too long ago to date, but passed down by word of mouth over generations.

In early Indian folklore, Owls represent wisdom and helpfulness, and have powers of prophecy. This theme recurs in Aesop's fables and in Greek myths and beliefs. By the Middle Ages in Europe, the Owl had become the associate of witches and the inhabitant of dark, lonely and profane places, a foolish but feared spectre. An Owl's appearance at night, when people are helpless and blind, linked them with the unknown, its eerie call filled people with foreboding and apprehension: a death was imminent or some evil was at hand. During the eighteenth century the zoological aspects of Owls were detailed through close observation, reducing the mystery surrounding these birds. With superstitions dying out in the twentieth century - in the West at least - the Owl has returned to its position as a symbol of wisdom.

In the mythology of ancient Greece, Athena, the Goddess of Wisdom, was so impressed by the great eyes and solemn appearance of the Owl that, having banished the mischievous crow, she honoured the night bird by making him her favourite among feathered creatures. Athena's bird was a Little Owl, (Athene noctua). This Owl was protected and inhabited the Acropolis in great numbers. It was believed that a magical "inner light" gave Owls night vision. As the symbol of Athena, the Owl was a protector, accompanying Greek armies to war, and providing ornamental inspiration for their daily lives. If an Owl flew over Greek Soldiers before a battle, they took it as a sign of victory. The Little Owl also kept a watchful eye on Athenian trade and commerce from the reverse side of their coins. 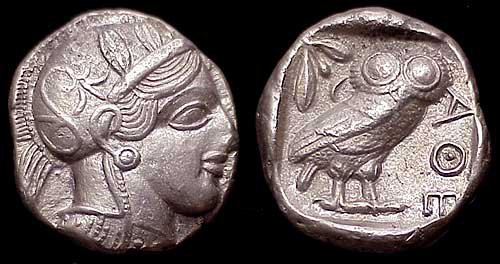 An Athenian Tetradrachm from after 499 BCE. CC BY-SA 3.0 Source

In early Rome a dead Owl nailed to the door of a house averted all evil that it supposedly had earlier caused. To hear the hoot of an Owl presaged imminent death. The deaths of Julius Caesar, Augustus, Commodus Aurelius, and Agrippa were apparently all predicted by an Owl.

"...yesterday, the bird of night did sit Even at noonday, upon the market place, Hooting and shrieking" (from Shakespeare's "Julius Caesar")

The Roman Army was warned of impending disaster by an Owl before its defeat at Charrhea, on the plains between the Euphrates and Tigris rivers.

According to Artemidorus, a second Century soothsayer, to dream of an Owl meant that a traveller would be shipwrecked or robbed.

Another Roman superstition was that witches transformed into Owls, and sucked the blood of babies.

In Roman Mythology, Proserpine (Greek: Persephone) was transported to the underworld against her will by Pluto (Greek: Hades), god of the underworld, and was to be allowed to return to her mother Ceres (Greek: Demeter), goddess of agriculture, providing she ate nothing while in the underworld. Ascalpus, however, saw her picking a pomegranate, and told what he had seen. He was turned into an Owl for his trouble - "a sluggish Screech Owl, a loathsome bird".

Folklore surrounding the Barn Owl is better recorded than for most other Owls. In English literature the Barn Owl had a sinister reputation probably because it was a bird of darkness, and darkness was always associated with death. During the eighteenth and nineteenth centuries, the poets Robert Blair and William Wordsworth used the Barn Owl as their favourite "bird of doom." During that same period many people believed that the screech or call of an Owl flying past the window of a sick person meant imminent death.

The Barn Owl has also been used to predict the weather by people in England. A screeching Owl meant cold weather or a storm was coming. If heard during foul weather a change in the weather was at hand.

The Custom of nailing an Owl to a barn door to ward off evil and lightning persisted into the 19th century.

Another traditional English belief was that if you walked around an Owl in a tree, it would turn and turn its head to watch you until it wrung its own neck.

Among early English folk cures, alcoholism was treated with Owl egg. The imbiber was prescribed raw eggs and a child given this treatment was thought to gain lifetime protection against drunkenness.

Owls' eggs, cooked until they turned into ashes, were also used as a potion to improve eyesight.

Owl Broth was given to children suffering from Whooping-cough.

Odo of Cheriton, a Kentish preacher the 12th Century has this explanation of why the Owl is nocturnal: The Owl had stolen the rose, which was a prize awarded for beauty, and the other birds punished it by allowing it to come out only at night.

In parts of northern England it is good luck to see an Owl.

Among the different American Indian tribes, there are many diverse beliefs regarding the Owl. Presented here are some of those beliefs.

According to an Indian legend, the 'Spedis Owl' carving was placed on a rock to serve as a protector from the 'water devils' and monsters that could pull a person into the water. The owl on a rock may have also indicated the ownership of that location for fishing. 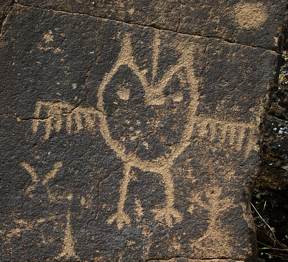 This petroglyph, the 'Spedis Owl' was salvaged from along the Columbia River just before The Dalles Dam flooded the area in 1956. This carving is on display at Horsethief Lake State Park, Washington. Photo © Ralph Turner.

To an Apache Indian, dreaming of an Owl signified approaching death.

Cherokee shamans valued Eastern Screech-Owls as consultants as the owls could bring on sickness as punishment.

The Cree people believed Boreal Owl whistles were summons from the spirits. If a person answered with a similar whistle and did not hear a response, then he would soon die.

The Dakota Hidatsa Indians saw the Burrowing Owl as a protective spirit for brave warriors.

The Hopis Indians see the Burrowing Owl as their god of the dead, the guardian of fires and tender of all underground things, including seed germination. Their name for the Burrowing Owl is Ko'ko, which means "Watcher of the dark" They also believed that the Great Horned Owl helped their Peaches grow.

The Inuit believed that the Short-eared Owl was once a young girl who was magically transformed into an Owl with a long beak. But the Owl became frightened and flew into the side of a house, flattening its face and beak.
They also named the Boreal Owl "the blind one", because of its tameness during daylight. Inuit children make pets of Boreal Owls.

The Kwakiutl Indians were convinced that Owls were the souls of people and should therefore not be harmed, for when an Owl was killed the person to whom the soul belonged would also die.

The Lenape Indians believed that if they dreamt of an Owl it would become their guardian.

The Menominee people believed that day and night were created after a talking contest between a Saw-whet Owl (Totoba) and a rabbit (Wabus). The rabbit won and selected daylight, but allowed night time as a benefit to the vanquished Owl.

The Montagnais people of Quebec believed that the Saw-whet Owl was once the largest Owl in the world and was very proud of its voice. After the Owl attempted to imitate the roar of a waterfall, the Great Spirit humiliated the Saw-whet Owl by turning it into a tiny Owl with a song that sounds like dripping water.

To the Mojave Indians of Arizona, one would become an Owl after death, this being and interim stage before becoming a water beetle, and ultimately pure air.

According to Navajo legend, the creator, Nayenezgani, told the Owl after creating it "...in days to come, men will listen to your voice to know what will be their future"

California Newuks believed that after death, the brave and virtuous became Great Horned Owls. The wicked, however, were doomed to become Barn Owls.

In the Sierras, native peoples believed the Great Horned Owl captured the souls of the dead and carried them to the underworld.

The Tlingit Indian warriors had great faith in the Owl; they would rush into battle hooting like Owls to give themselves confidence, and to strike fear into their enemies.

A Zuni legend tells of how the Burrowing Owl got its speckled plumage: the Owls spilled white foam on themselves during a ceremonial dance because they were laughing at a coyote that was trying to join the dance. Zuni mothers place an Owl feather next to a baby to help it sleep.