A baby owl is found

Eric's story is very common in the UK. He first came to us at about 4 weeks old, we were visiting Holdenby Falconry Centre, who were being over-run with Tawny Owl chicks and cast out Barn Owls. The Barn Owls were at the time a status symbol but people found that it takes a lot of time to look after them so they were dumping them on anybody who would have them. Tawny Owl chicks leave the nest at 4 to 5 weeks, this I think is to minimise losses to predators, carrion crows, magpies and foxes. So what the chicks do is pick a tree or building to roost in make their way to that spot and then mom and dad feed them on a regular basis. The hard part is getting from A to B, this means that they have to cross roads, footpaths or gardens. Most of the time this can be tricky. Eric got half way over a main road and then fell asleep on the white line, this seemed to be the story of his life, a passing motorist spotted him and picked him up, good idea, then he took him home and popped him in the garden, thinking mom and dad would find him - Bad idea. After 2 or 3 days this small ball of fluff was still clinging on to the branch it was deposited on. The Samaritan then decided to take him to someone who knew what to do with him. I was there when this starving fluffball came in, and I was very angry and upset that it had taken so long. 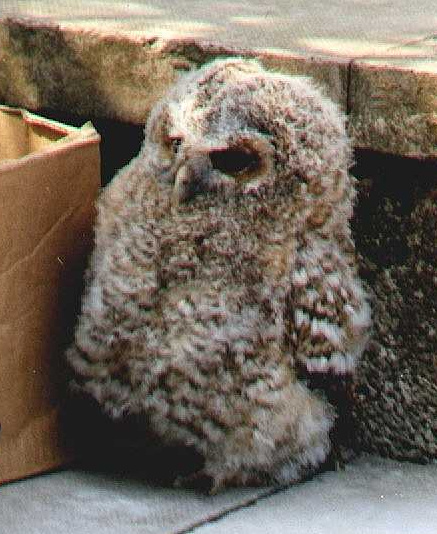 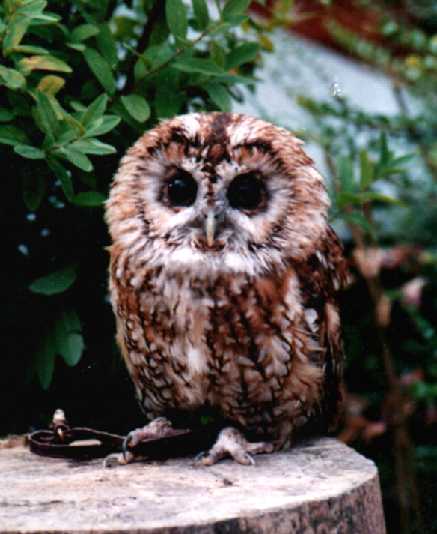 Eric was so weak that I had to force feed him, thus imprinting him, and the centre could not find room, so he came home with us. As he was imprinted we got him registered with the Department of the Environment and started to train him up for display. Eric had a distinct personality almost like a small boy trying to see what he could get away with. He was with us for 7 years, moved with us to rugby and settled down here. But all the time the wild side showed, calls in the night and the slow blink that Tawny Owls give. One night just over a year ago I went in to feed him and he shot off the glove. we searched for him for over a week to no avail. We all thought that he was dead, then one night I was walking Toro and he showed himself to me on a branch, I was overjoyed more so when a female dropped on to the branch next to him. So Eric went back to the wild, in his own time and place. The best advice I can, and do, give to people is if you find a Tawny owl chick in the road or on a footpath DON'T take it home, put it somewhere safe.