The Fledging of Junior

When I first noticed the Great Horned Owl peering from the Osprey nest on the platform at Island Farm [Delaware, USA] last February 11th [2015], I was not surprised. This was the sixth time that I had seen a Great Horned Owl use one of the platforms. This particular platform was easily visible from the road as I travelled back and forth from home each day, and I watched for weeks as the mother stoically endured the ice, snow, sub-freezing temperatures and gale-force winds of this year's unusually brutal winter.

By the second week of March, a little patch of gray feathers was visible in the nest next to Mom, and on March 25th I watched as the fuzzy hatchling parted its mother's feathers and climbed up just high enough for me to see its two huge eyes looking over the edge of the nest. As I watched the hatchling grow, (I began referring to it as "Junior" for the purpose of the notes that I was taking and to the visible adult owl as "Mom"; I never saw two adults at once, so I don't know if I ever saw the male), I began preparing my strategy for figuring out when the fledging would take place. I had previously observed many owls' nests but had never managed to actually witness the first flight of any of the owlets. Much has been written about fledging, but I have not found any description of an owl taking flight from an Osprey platform. Several years ago I had watched a hatchling on this very platform, and I had assumed that since owls are nocturnal, it would fledge at night. On the day I had expected it to fledge, I showed up at sunset, only to find that it had fledged during daylight hours. I hoped that this time would be different. 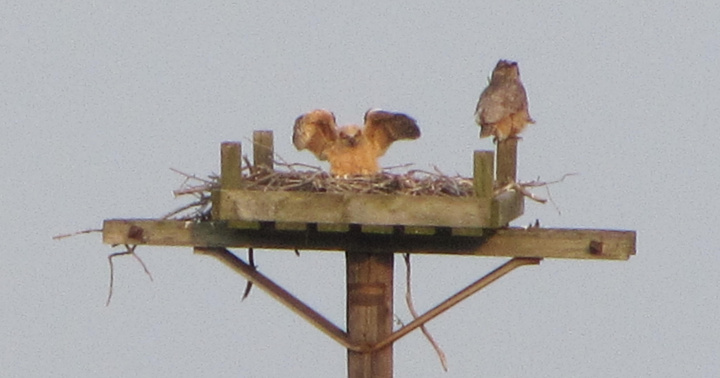 As Junior began his "flight training", he enthusiastically stretched his wings, stomped around on top of the nest, and eventually began hopping and flapping at the same time. Mom was spending most of her time in a nearby Cedar tree. She would leave a cache of food in the nest for him, and he could pull out a snack whenever he was hungry. On several occasions, Osprey dive-bombed the nest, and Mom came charging out of the tree and fended off the intruders. She would usually remain with Junior for a couple of hours of snuggling and preening. I once saw them sitting side by side with their heads back and beaks pointed up in the air as they watched the Osprey circling. On some days, she would sit on one of the corner posts of the platform and watch Junior do his flapping exercises. By April 25th he was able to flap/hop all the way across the nest, and he would do so continuously. The daytime temperatures were becoming warmer by the beginning of May, and the only shade available to him was the shadow of one of the short corner posts. He would try to burrow into that corner of the nest, but his size was preventing him from escaping the rays of the sun. I thought that certainly Mom would be getting him off of his platform soon.

On May 6th as I was driving past the nest, I saw Junior standing tall and motionless with his wings down. His eyes were laser-focused on the Cedar tree, where Mom was sitting out on the front edge in plain sight. For two hours I watched him maintain his statue-like stance. Finally he began flapping and hopping up and down and I held my breath. I was sure this was it—he was going to go! But he wasn't quite ready yet. He hopped back into the nest and went sound to sleep. I was beginning to face the fact that my chances of actually seeing him go were fairly slim, and I tried to prepare myself for the empty nest that I might see in the morning. I was determined that instead of being disappointed, I would celebrate the life of this wonderful little creature and be grateful for the opportunity I had been given to get to know Junior and his mother.

I was up at sunrise the next morning and rushed out to the nest. Junior was back on the edge of the platform enshrouded in a thick fog that had come rolling over the marsh. He began furiously leaping back and forth across the nest and then suddenly stopped and went to sleep. I left for awhile, as I knew that his nap usually lasted for several hours. I could see Mom over on the Cedar tree, and I realized that I had been seeing her escalate her tactics for the past couple of days. Junior's food cache appeared to be gone—on the previous day he had looked into the nest but had not come up with anything, and Mom hadn't brought dinner until late in the day. The Osprey attacks had increased, but after she ran them off, she would go directly back to her Cedar tree. No more snuggling for Junior. And she was continuing to sit out where Junior could plainly see her. By now I was spending most of each day observing and taking notes. I thought about how Junior never appeared frightened when the Osprey flew at him. He knew with absolute certainty that Mom would be there to protect him. I wondered if my fascination stemmed from the fact that I had never known this kind of bond in my own childhood. I tried to imagine what it would be like for Junior to take that first step into a world that would suddenly expand exponentially.

On May 8th I was continuing my vigil, but something had changed. Junior was standing on his corner post facing the Cedar tree when I arrived, and he continued to do so all day. I could not see Mom in the tree. At around 6:45 that evening, I was watching him through my binoculars, and he suddenly opened his mouth and appeared to be panting. I glanced at the Cedar and saw that Mom had appeared. The two of them locked eyes and stared intently at each other. I could almost feel a sort of electricity connecting them. I put down my camera, as I wanted to fully experience what was about to happen - with nothing coming between me and the owls. In that instant there was not anything in the world that could have made me take my eyes off of Junior. And at 7pm, with a surprising lack of hopping, flapping or fanfare, Junior launched himself from his platform, sailed right to the Cedar tree, and landed on the ground in front of Mom. It was a breathtaking scene. Because Junior had landed in tall vegetation, I could not see if another adult owl was there with him. Mom remained in the tree watching me. I got back into my car so as not to prevent her from going to him, and I knew that it was time for me to leave. I sat for a minute in disbelief of what I had just witnessed. And despite my resolve not to do so, I shed more than a few tears as I wished Junior a safe and wondrous future. Many times since that day I have re-lived that magical moment in time when Junior went soaring off toward the rest of his life. Now whenever I drive past the platform, just knowing that he is out there learning about his new world fills me with great joy and gratitude.