The Economic Value of Barn Owls

Can you really put an economic value on a wild animal? The answer is, of course not. The value of what wild animals and wild systems do, such as owls and hawks and bigger organisms like rivers and marshes is incalculable in the long run. They are so interconnected to each other that there is no isolating a single entity in the natural world. And how does one put a value on beauty or fascination? But, when it comes to human enterprise, specifically farming, which is weighed in economic terms in many ways, researchers have been able to find methods to show farmers the value of certain beneficial insects, birds, and mammals. This is vitally important to highlighting the contributions of these creatures so that farmers can compare approaches such as integrated pest management with more invasive methods such as poisons. 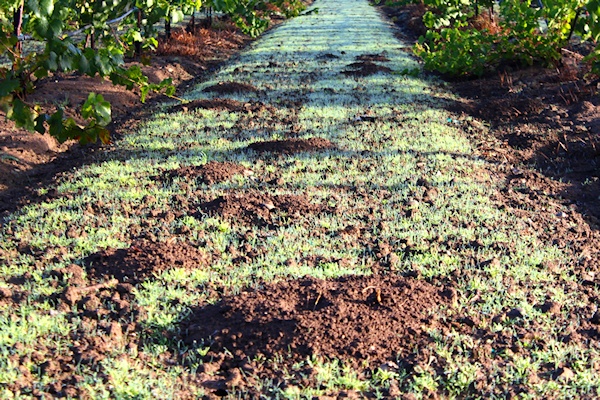 A vineyard with Pocket Gopher mounds

When a farmer is considering a new method of rodent control that may or may not protect his crops, he needs to know whether or not it is viable. At first glance, poisons look lethal and effective- at least we know they will work to kill rodents. But is sometimes far harder to understand that a population of birds can even do more than those poisons. It seems a bit nebulous to put ones faith in a population of birds.

Importantly, we also monitored the rodent population, analyzed what species of rodents they were eating by dissecting their pellets, and used nest box cams to count the number of prey they brought in over the breeding season. In short, we were able to determine how many of each rodent this huge population of owls was consuming over one year.

The nest boxes utilized for the study were ones designed by the author. Made of heavy-duty molded plastic, they satisfied the goal of being long lasting and easy to install to make such nest box programs easier for farmers and conservationists. They also included a research window in the rear for checking on adults, eggs, and chicks without running the risk of being raked by talons at the entrance hole. More information on the Barn Owl Box design. 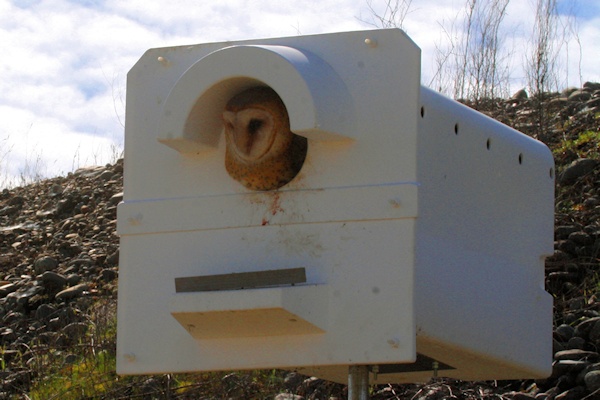 An adult Barn Owl emerges from the Barn Owl Box

The nest boxes were placed at 500 foot intervals along a perimeter road that surrounded the vineyard on eight-foot high poles, a height we found to be good for both barn owls and researchers. 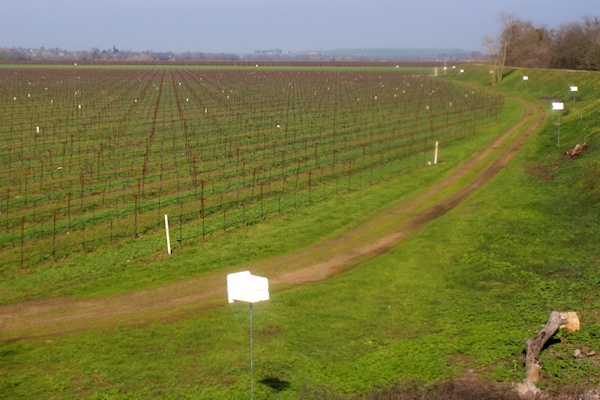 Nest boxes in place at the vineyard

The number of rodents taken by a population of barn owls is the most important factor in their effectiveness. Adult barn owls tend to remain in the area year-round. Numerous studies have shown that they consume a minimum of one rodent per evening throughout the year (365 per year). Barn owl chicks grow at a fast rate and eat more than the adults, consuming large numbers of rodents over the eight to nine week period before fledging. (Our nest box videos have shown that they start out at 1.1 prey items per night in their first week, increasing to 2.5 in their fourth week and remain near that level until their eighth week when they fast prior to fledging.) 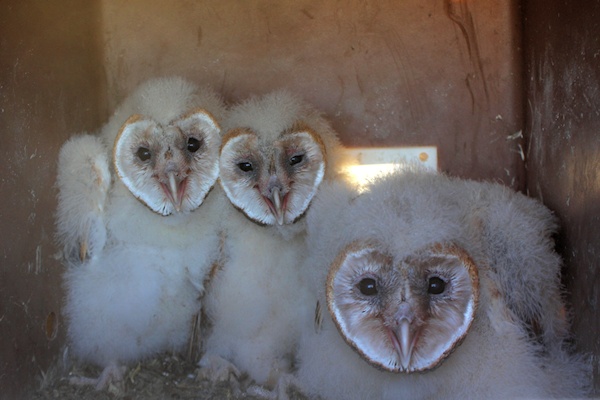 Three Barn Owls at about 4 weeks of age

Our conservative estimate is that each chick consumes 112 rodents while growing. Once fledged, they begin to consume rodents at the adult rate of one per night, minimum. They remain in the natal area for approximately six more weeks before dispersing which accounts for another 154 rodents consumed by each fledgling owl. Our calculations show us that in 2011, the resulting population of owls consumed an estimated 9576 rodents. In 2012, the growing population of owls consumed approximately 15,204 rodents for a total of 24,780 rodents consumed in the first two years of the program, by any account, a prodigious number of rodents being harvested.

Importantly, night time observations showed that they primarily hunted the targeted vineyard. It is also important to note our surveys showed that, through the three years of census, as barn owl numbers increased, rodent activity declined. Our second year of very high barn owl numbers was followed by the lowest ever activity levels for pocket gophers. Though further study is warranted, these numbers suggest that the barn owl population was very effective in reducing rodent numbers significantly. More in-depth information about this research project.

The Economic Value of Barn Owls

On our study area, the original cost of 25 nest boxes, poles, mulch for bedding, and installation labor was approximately $6000.

In the first two years, a total of 24,780 rodents were consumed. By the end of the second season, the investment of $6000 had resulted in this impressive harvest of rodents at a cost of $.24 per rodent. As subsequent years result in further numbers, the cost per rodent will decline even further. In a five year period, the cost per rodent harvested becomes almost negligible.

This stands in significant contrast to other methods of control such as strychnine pellets and flammable propane gas. Strychnine is driven into the ground at regular intervals by a machine or by hand that requires each row to be driven or walked for the entire length of the field. There are over 250 rows in a 100 acre vineyard. The strychnine costs hundreds of dollars per application and the process takes days of labor and must be repeated when the rodents recover. A second method involves pumping propane gas down the burrows and igniting it, resulting in an explosion that kills everything in the burrow and makes the neighbors jump! This method is even more labor intensive.

Farmers are not the only ones benefiting from barn owls. Many property owners, annoyed by rodent pests, or merely interested in having these interesting owls around, have been installing owl houses around their properties.

The beauty of a barn owl nest box program is that it is self-perpetuating. Barn owls are very faithful to their breeding sites, returning year after year. And barn owls do not rest. They must eat, and therefore their pressure on a rodent population is relentless, unlike most poisoning programs. And the maintenance for nest boxes is minimal - they need their mulch replaced once per year. Another benefit is that all the other forms of indigenous wildlife remain unharmed. This includes numerous species of amphibian, reptile, rodent, and mammal. So biodiversity is preserved. And who can put a price on that?

For more information on the author, go to http://www.barnowlbox.com/about-barn-owl-box/.