The diet of the Tawny Owl Strix aluco, Linnaeus 1758, was studied via pellet analysis from 3 localities: Zvezdara (Belgrade), and the caves of Potpeć and Petnica. A wide diversity of small mammals were found in both samples, with a total amount of 387 prey items belonging to Vertebrates, as well as an undetermined number of Invertebrates, belonging to orders of Lumbriculidae (Annelida, Oligochaeta), Coleoptera and Odonata (Arthropoda, Insecta). The most abundant among prey items were rodent species, especially mice and dormice. Voles, bats, shrews and moles were also present in the pellets. In total there were 20 mammal species identified. The variety of prey items in all samples indicates the Tawny Owl is an opportunist in it's diet as well as a good indicator of small mammal's distribution in woodland ecosystems. 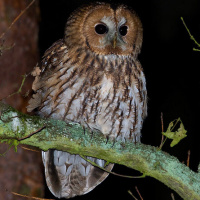 The Tawny Owl (Strix aluco Linnaeus, 1758) is a common species in most of Europe (Mikkola 1983). It inhabits semi-open deciduous and mixed forest, open woodland, parks and similar habitats, but with clearings and rides nearby (König et al. 1999).

The Tawny Owl is a generally nocturnal species, although in breeding season it can be seen hunting by daylight. This owl is very skilful in hunting within the forest. Feeding habits of the Tawny Owl are within a wide variety of available small size prey items: small mammals, birds, frogs, reptiles and even fish; larger insects, earthworms and snails are often found in its diet. Regarding feeding specialization, the Tawny Owl is much more of a generalist than other owls of Strix genera (Mikkola 1983). Mammal items of smaller size (e.g. mice) are swallowed whole, while larger items are torn into pieces and birds are plucked before consumption. Indigestible items, such are feathers, fur, chitin and also bones, especially skulls, are regurgitated via rather large pellets (25.3 x 21.0 mm to 45 x 21.0 mm).

The Tawny Owl pellets vary in appearance and size, depending on food. The contents of the Tawny Owl pellets does not accurately represent the contents of the prey consumed. Most of the time, the remains of the Apodemus (40%) and Mus (60%) species are missing in the pellets (Andrews 1990). In general, 15 to 60% of the prey ingested may not be recovered from the pellets. This feature is result of more efficient digestion in these owls than in other owl species. On the other side, due to diversity of the hunting behavior, the prey taken by the Tawny Owls is very diverse. On average, the diversity of prey taken by this owl species is well representing of the community of small mammals in the hunting area - their availability as well as accessibility. The only restriction is in mass of the prey - it appeared that the upper limit of the prey rarely exceeds 150 g. The Tawny Owl pellets that were analyzed, were found in the remains of Observatory Cupola in Belgrade, Zvezdara (site 1) as well in two caves: Petnička Pećina (site 2) and Potpećka Pećina (site 3) of the western Serbia.

Zvezdara is a municipality of Belgrade and the site where the pellets were found is located in Zvezdara forest, which is a large area of mixed deciduous trees, partially park, and partially non-maintained forest habitat. Petnička Pećina is situated in the village Petnica, 7.5 km southeast of Valjevo. Potpećka Pećina is situated in the village of Potpeće about 10 km southeast of Užice (Đurović 1998). 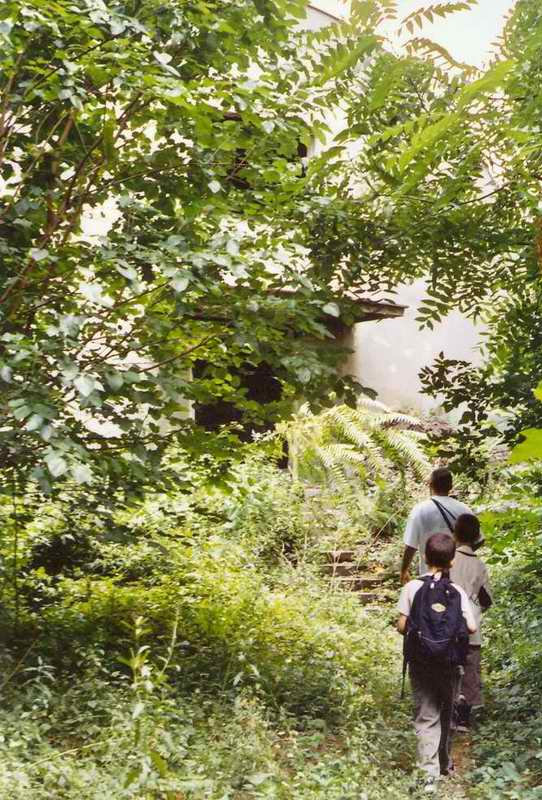 Zvezdara astronomy observatory in Belgrade, this one was damaged during bombardment in 1999, and one of the Tawny Owls find it as perfect shelter, her own Sanctuary. We collect its pellets periodically and really found extremely interesting things there. 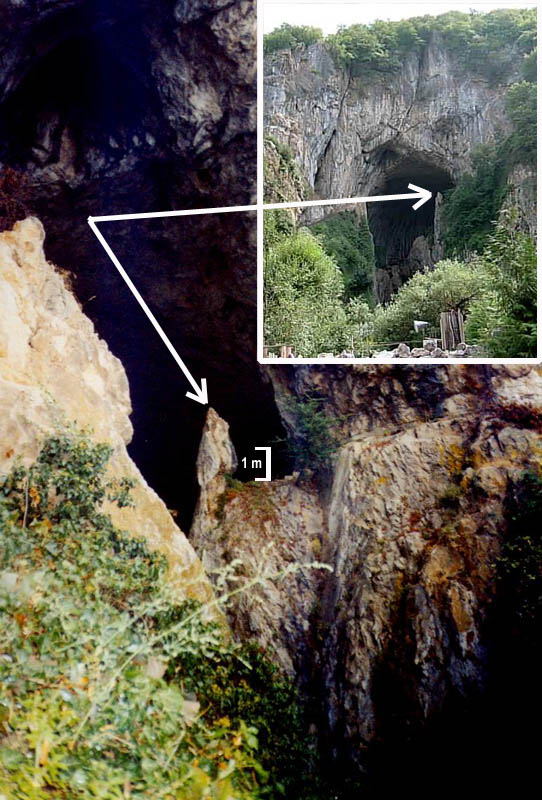 Magnificent Potpećka cave: at the entrance there is a cliff (white arrows) that is obviously favourite roosting site for at least one Tawny owl. This is very hard spot to approach, but luckily, pellets usually roll down to the base of the cave entrance where they are protected from rain.

The following skeletal elements were quantified and identified to species wherever possible: maxillae, mandibles, pelvis and any characteristic elements, such as humeri. The number of individuals was calculated using minimum number of individuals (MNI) per species (Andrews 1990). The most valid were cranial elements such as maxillary tooth rows and mandibles. Small mammals' prey remains were identified by means of reference collections from the Museum of Natural History, Belgrade and the Institute for Biological Research “Siniša Stanković”, Belgrade. Identification was also carried out following criteria according to Schmidt (1967), Niethamer et Krap (1978, 1980), März (1987) and Turni (1999). Molar patterns were of the greatest significance for identification and the “Reinchardt” binocular magnifier was used for that purpose (10 to 40 ­ fold magnification).

Most of the prey items were identified up to the species level. Problems were encountered in the identification of remains for subgenus Sylvaemus species, due to the degree of damage of the skull or due to problems in distinguishing this species per se. In general, vole skull remains were more preserved and only in the absence of molars were items identified up to the genus level. Exceptions were Clethrionomys glareolus (Schreber 1780) prey remains, due to distinctive alveoli structure; hence it did not matter if molars were missing. On the contrary, Apodemus sylvaticus (Linnaeus 1758) and A. flavicollis (Melchior 1834) remains were difficult to distinguish in most of the cases. None of those remains had a preserved intact skull, reducing possible measurements of the neurocranium that could be useful for identification. Those individuals were therefore identified up to the subgenus level.

Pellets from Zvezdara site were collected in several occasions, and they included both intact pellets as well as pellet residues. There were 14 intact pellets originating from Potpećka Pećina but pellets originating from Petnička Pećina were already disintegrated by moths, therefore disabling reconstruction of number of the pellets. At all localities Tawny Owl feathers were present at the places where pellets were found, and at the Zvezdara site Tawny Owl have been observed on several occasions in 2003 and 2004. The size, form and content of the pellets were identical to Tawny Owl's typical diet and the way of resembling the bones (Andrews 1990). All prey remains derived from those pellets are presented in the table below. There were identified 387 prey items belonging to classes Mammalia and Aves, and in Zvezdara and Petnička Pećina there were also present considerable amounts of insect remains (Coleoptera and Odonata mostly). At the Zvezdara site, considerable amounts of pellets were clearly consisting of earth-worms, although some other peculiar items were found inside the pellets, such as, for instance, a piece of cloth (Picture 1). 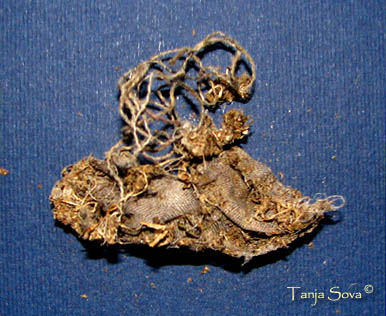 Comparing to other owl species, the Tawny Owl has a broad spectra of food. Thus its pellets vary greatly in appearance and size, depending on what the owl has been eating (Picture 2). 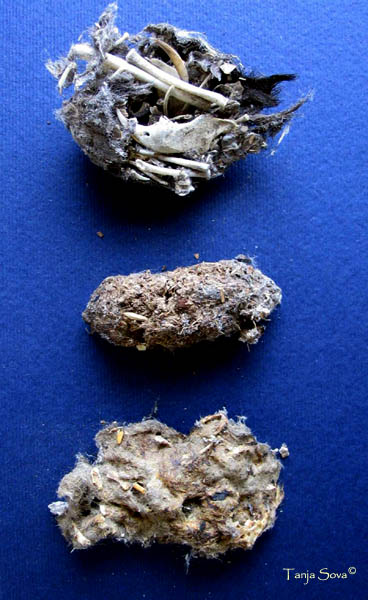 Pellets are rather small, compact and light brown in color in the case of eating earthworms. In the case of vertebrate prey, pellets are much larger and less compact. In the case of rejecting pellets on a wet surface, they tend to disintegrate quickly, thus caves and other sheltered roosting places are much better for conservation of their pellets. In any event, prey representation in the pellets appears to be only a small proportion of the prey ingested. The main reason for this lack of prey recoveries, lays in the greater degree of prey ingestion comparing to other owl species. According to the categories of the species diversity found in Tawny Owl pellets, both within and between these taxonomic groups, there is a higher level of species equitability than is usually found in other predator assemblages (Jovanović, 2002; Jovanović et al, 2005). The upper limit for prey size appears to be 150 g (Yalden, 1985). In general, Tawny Owl diet depends on prey availability and accessibility. It can be assumed that prey assemblage of this predator remarkably represents the small animal communities present in the habitat. Since samples in our study were significantly disproportional, this paper is based rather on prey composition then on number and proportion.

The most common prey category in samples were rodent species, and amongst them, wood mice were preferred (see Graph). Sympatric Wood mouse, Apodemus sylvaticus and Yellow-necked mouse, Apodemus flavicollis belong to subgenus Sylvaemus and they are important species in the diet of mammalian carnivores and owls. As mentioned before, there are many studies documenting the problems of distinguishing each species among those individuals (Tvrtković 1976, Ruprecht 1979). A. flavicollis is a genuine forest mouse, living both in minor and major forest complexes, always in sites with trees or at least with bushes. A. sylvaticus is found mainly outside the forests, usually near edges. Preferred habitats are shrub areas (Petrov 1992). Apodemus agrarius has a diverse distribution - can be found in field as well as in forests, with more specific habitat requirements comparing to A. sylvaticus. A. agrarius prey items could undoubtedly be distinguished from those belonging to subgenera Sylvaemus and genera Mus. Sylvaemus prey items were by far the most common in Tawny Owl diet. House mouse, Mus musculus and Harvest mouse, Micromys minutus prey remains were present in sample from Petnička Pećina. M. musculus in central parts of Serbia is not rare to be found outdoors, usually in hedges along fields, but mainly not far from human dwellings. M. minutus lives in lower rather humid places. It is rather rarely found out of plains. Dormice (Fat dormouse, Myoxus glis and Hazel dormouse, Muscardinus avellanarius) were following mice in total proportion, thus representing mostly the woodland small mammal fauna. M. glis is much more related to forest habitats then M. avellanarius, which prefers schrubs. Commensal Rattus prey items were present in all samples, and one of large prey items as well, squirrel Sciurus vulgaris, has been found in Zvezdara locality. 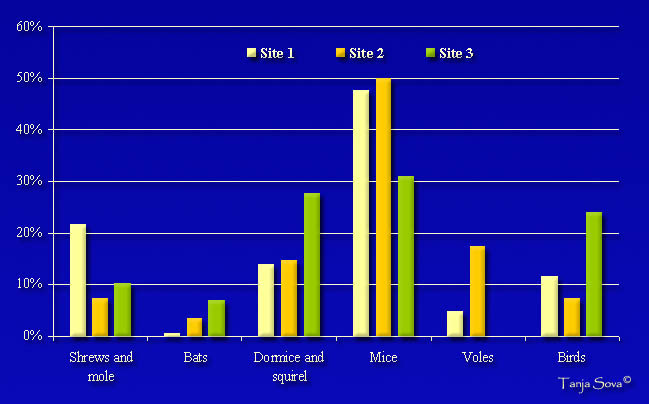 Regarding voles, they were not present in samples from Potpećka Pećina, probably due to the rather small size of the sample. The voles present in other samples were: Bank vole, Clethrionomys glareolus, confirming the woodland fauna composition at two sites, and two Microtus species: Common vole, M. arvalis and European pine-vole, M. subterraneus as well. The later one is often found near or inside the forest habitats, while M. arvalis prefers meadows and open fields, but can be found near forests as well (Petrov 1992). The ratio of Microtus and Sylvaemus / Clethrionomys species in the diet of predators forms a good indicator of the differences in the degree to which forests and fields are used as hunting grounds (Goszczynski 1977). In this case it means dominance of the forest habitats around caves / shelter.

Prey remains found in pellets from both caves and Zvezdara observatory, clearly represent accurately the small mammal fauna sample of the surrounding environment. In addition, according to Đurović (1998), most of the small mammals remains we found in Petnička Pećina, were recorded in fossil remains at the same site. In conclusion, it can be recommended Tawny Owl pellet analysis is a valuable screening method in small mammals' distribution research.

Table: Vertebrate prey items sorted by taxa categories they belong to, presented by means of number and body mass percentage.

Authors are thankful to Predrag Jakšić and Georg Džukić for obtaining the Tawny Owl pellets originated from Potpećka Pećina. We are also thankful to Milan Paunović, Belgrade Natural History Museum curator, for identifying Chiroptera prey items and providing a small mammal skull collection for reference. We are thankful to Deane Lewis and Douglas Grove for English correction of the article. This study was supported by the Ministry of Science, Technology and Development of the Republic of Serbia, Grant #1565 and is part of Global Owl Project, www.globalowlproject.com.