Born in 1946 and growing up among the rolling hills of Virginia's Piedmont in the little town of Clover, Hap developed an early love of the outdoors and wildlife. His work is greatly influenced by the natural world that surrounds us and the myth and legend of ancient animistic cultures. He works in wood and stone, with occasional work in clay and bronze, and has studied under world-class carvers Ernest Muehlmatt and E. Lynn Forehand, as well as bronze sculptor John Quinn. He is self-taught in stone sculpture.

Both his style and subject matter have changed since he began his sculpting career in 1987, moving from realistic to interpretive and expanding from only birds to all species of wildlife, as well as an occasional nature-related human figure. Originally, he worked in a rigid realistic style, putting in as much detail as possible. He now leaves out what he considers non-essential detail, feeling he can best capture the “essence of the being” with a looser, more impressionistic interpretation. His intention is to release the spirit from within the wood or stone, while capturing the spirit within the subject and expressing the spirit that is within himself. 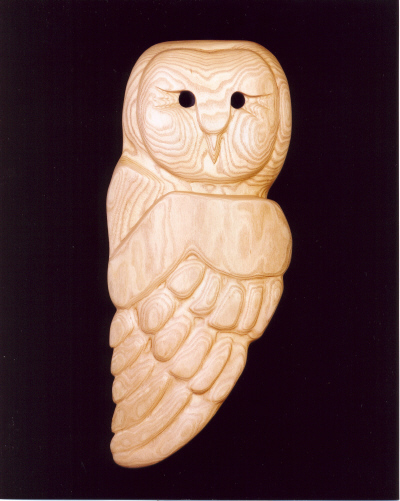 In ancient Columbia owls were closely associated with Shamanism and powers of the night. Like the owl, the Shaman can see in the dark. 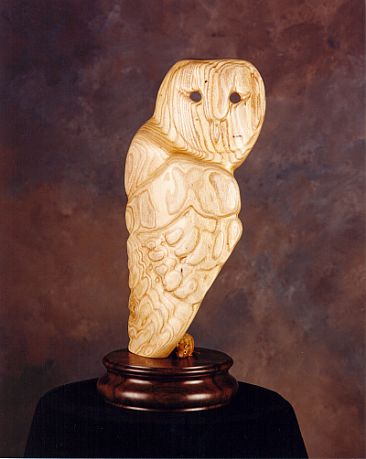 In ancient Greece the owl was said to be a "Force of Mystery"; symbol of the goddess Athena, goddess of night, war, wisdom, and the liberal arts. This piece is a free-standing mask carved from a relatively thin piece of paulownia (wood), while the little mouse at the tip of the owls wing is a full-bodied figure made of mahogany. Collection of Ronald S. Feldman. 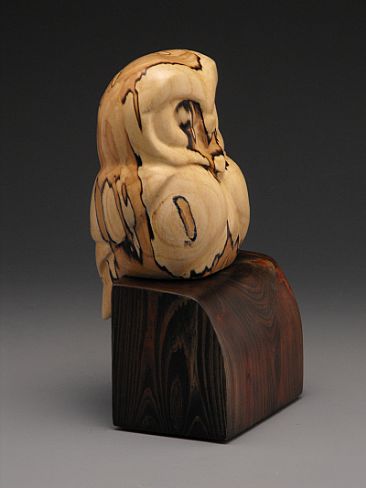 Some American Indian tribes believed the owl was a prophet. Due to the spalting pattern of the wood, this little guy appears to be crying, in prophecy of environmental tragedies to come.