It is estimated that millions of birds collide with windows each year world wide, with approximately one third of the collisions resulting in a fatality. It is thought that birds hit windows because they see the landscape, trees, sky, and clouds reflected on the glass surface but do not realise that a hard, transparent surface lies between them and that apparent open space. Inevitably some of these collisions will involve owls, and we have been sent various photos over the years here at The Owl Pages that show the evidence of an owl colliding with a window.

These pictures were taken in 2021 by Mr James Marren in Auburn, New York, USA.

The bird is a Barred Owl. The photos were posted on our Facebook page by James Marren, who writes:

"I was doing my laundry early one morning and this little guy hit the window at the laundromat, he was shaken up and dazed for a little while, but he flew away." 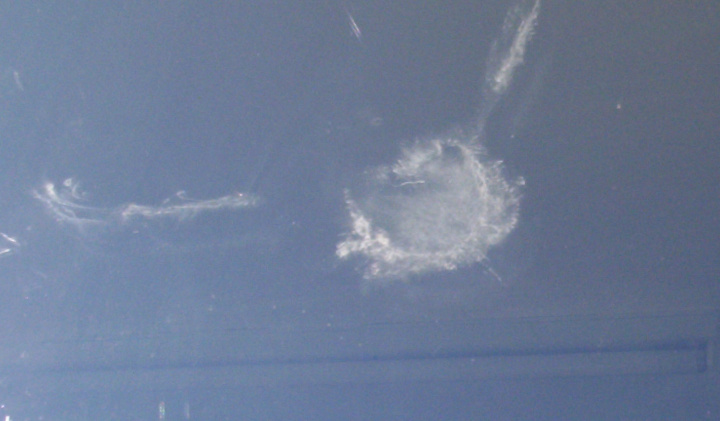 This picture was taken in October 2003 by Jane Clamp in the USA. 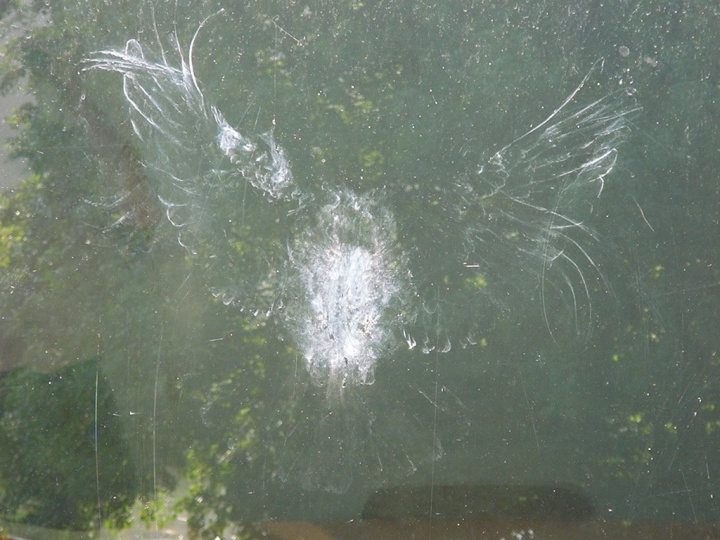 This picture was taken in 2002 by Mr Henk Post in northern Holland.

The above photos was sent to The Owl Pages by Arnaud Deijll [b.deyll.devegt@quicknet.nl], who writes:

"It is a long eared owl, or 'Asio otus'. The window is from the room of the director from an institution of mentally disabled people. The room is on the second floor of a building, and there are many trees in the surroundings. In the window stood some wooden birds (toys), the owl likely tried to attack these "birds" and collapsed against the window. The owl was not found, so he probably survived with a headache..." 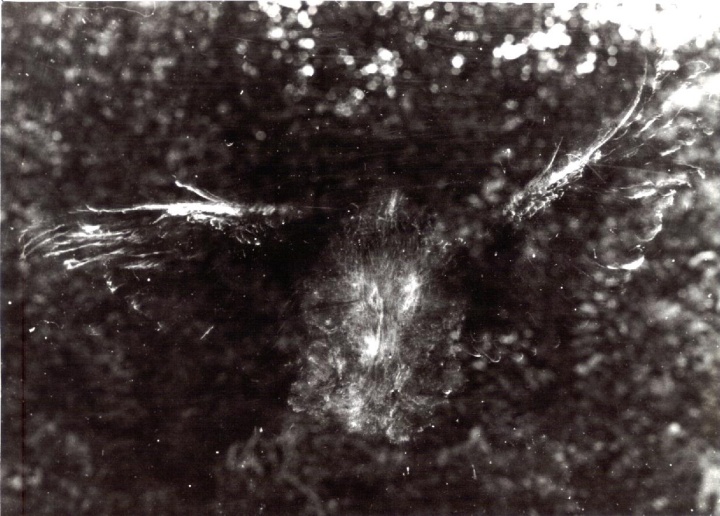 Submitted to The Owl Pages by Alan Sieradzki:

"Way back in July 1982, a friend of mine awoke to find that an owl had flown into his sitting room window sometime during the night. It must have been some impact for, as you will see in the picture, a near perfect image of the owl was left on the window by it's feather coating of fine powder adhering to the glass. You will note that the image is headless. The owl must have thrown it's head back at the very point of impact, thus avoiding serious concussion (this being proved by the fact that there was no body found beneath the window). The fine detail on the imprint of the feathers was quite remarkable; much clearer than shows up in the photograph. The photograph was taken from inside the room. Going by the feather detail, this was definitely a Tawny Owl. Incredibly, the image stayed on the window for more than three months, surviving both wind and rain."