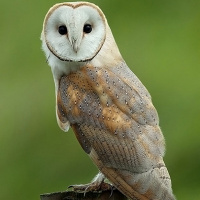 I was around 7 or 8 years old. I was living in a small village in Spain of no more than 100 inhabitants. My home was (and still is) just besides the old church. I used to go play with my cousins every afternoon and have dinner at their house... then I had to come back home... that means I had to pass just under the tower of the church where barn owls where living.

You know, the strange stories in the old continent, and much more in a small village like that are very usual. People used to say that the sounds of the barn owls (something like a "shhhhhhhhhh..." as far as I can remember), were the cry of spirits that couldn't get out from this life. I knew, because of my father that they were the "òlives" like we call in Catalan to the barn owls, but my fear was great anyway! Of course, I'd never seen one, but in pictures.

Around that time, a neighbor of the village (ok... I'll tell the truth... it was the priest) caught the couple, put them in a carton box and gave them to my father for him to give them to a friend who wanted to kill them and to embalm them and use their dead bodies to "decorate" some living room furniture!!

I just knew a carton box was staying on top of the washing machine with those animals alive inside. That night I couldn't sleep at all. My mind was getting from the feelings of the "evil animals that were staying there" to the "precious animals I've seen in the pictures". Finally I took one of the more important decisions of my life. I took my flash-light from my night table and I went out to the huge gallery where the washing room was. It was a clear night. I entered the room, and the box was there. Something moved inside and I stepped back. Finally I took a deep breath, cached the box and brought it outside...

Now I had to do it... I went too far to stop it! So I opened the box without thinking to much of the consequences and there we were, two precious white birds looking at me under the flash-light. No fear at all... neither them, neither me... They went out of the box slowly and flew silently. One to the next house, the other one stayed at the handrail of the balcony looking at me. Who says those birds have no expression??? He or she (I don't know) was telling me thank you! I'm so sure about this... even after more than 30 years. Then the couple flew away. I returned the box to the washing machine and left it like they escaped by themselves. Then I returned to bed. No need - I didn't sleep that night just thinking about the birds and the punishment I probably would have next morning!

So... the morning arrived. My father woke up and after a while he went to check up on the birds in order to give them to the friend. He come back from outside the balcony with a poker face. Not a word. Neither to my mother.

The day passed normally, and at the afternoon, when my father came back home he explained to my mother about the birds' runaway and then he explained that to the man who was waiting for them. She (my mother) was not caring too much about that and I crossed my eyes with my father's eyes several times. Night arrived and I went to bed with my dog as usual. My father entered my room after a short while. Sat on my bed. Looked straight at me, winked at me and whispered "This is my boy... well done".

You can imagine. I was the happiest boy in the world!!! Now, after the years, sometimes we still talk about that, and I know I helped him a lot taking out his guiltiness feelings.

Not to mention how pleased I was every night coming back home and listening to "my" barn owls. After a conversation between my father and the priest, he didn't bother them anymore... happy end.