The Icelandic word for owl is "ugla", which led to the Modern English word "ugly." - The Owl Pages - Owls In Lore and Culture 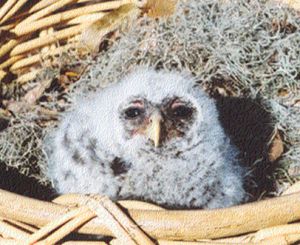 When my best friend, Ellie, arrived unexpectedly at my office toting a large cardboard box, I knew my life was about to change. Something in the box clacked loudly. "It fell out of a tree, and was on the ground for three days, and its mother didn't come back, and, I didn't know what to do, and, there were logging trucks cutting the forest, and, there were wild dogs and cats, and who knows what else!!!" Ellie paused for a deep breath, because she always babbled like that. "So, I brought it to you!" Ellie grinned at me sheepishly. Her face was red with exertion and the August heat of Florida.

Cautiously, I peered into the box. A chubby, silver, down-feathered ping-pong ball peered back at me with myopic charcoal eyes. The ping-pong ball let out a vivid screech, fluffed itself up to twice its size, backed up, and deposited a messy, green glop in the bottom of the box. Then it clacked loudly at me, like two hollow sticks being beat together.

"Oh, thanks Ellie! This is just what I need, a screeching ping-pong ball with talons as big as my hands, and a beak bigger than its face! Couldn't you have brought me an orphaned tiger or something?"

"What is it?", Ellie asked as she peered into the box at the peculiar baby. "I don't have the slightest idea what it is, but it sure is ugly", I joked. Gently, I reached in and picked up the downy bundle. Sharp talons gripped my hand tightly, but didn't break the skin. It didn't bite. Instead, after another clack attack, the little bird quieted down and simply stared at me intently. Its fuzzy little round head went in comical circles as it tried to focus. Occasionally, the little head would pop up like a periscope, and then pop back down.

Up close, it was even uglier. But, the eyes were beautiful, huge, and dark mahogany brown. Eerie, seemingly pupiless eyes gleamed inquisitiveness and intelligence. "It's a raptor, Ellie. But, what kind? Without identifying marks it could be a hawk, an eagle, an osprey, or an owl. The eyes look like an owl.". "Owls have yellow eyes", Ellie piped up. "Not necessarily, Miss Audubon", I teased her. Let me do some research. Right now, this little guy needs food, rehydration, warmth and rest.

Ellie's love for animals was evident in her big azure eyes. "Take care of it." She gently reached to pet the soft little head and was rewarded with an ear-ringing shriek, and an attempted nip at her hand. "That's gratitude for you," she sighed. Ellie left the strange hatchling with me. "I'll keep you posted," I called after her as she headed back out into the searing heat of the day.

My husband, Steve, arrived as I was bonding with the baby. When he saw the puff of feathers in my cupped hands, he gave me that LOOK. The LOOK that says.."Oh-oh, here we go again!" But, he didn't say anything. Steve knew he couldn't talk me out of it. We had been through this orphan rescue scenario many times. Secretly, he enjoyed animal rehabilitation as much as I did.

"That's the ugliest bird I've ever seen," was his only comment. Steve can always sum things up in one sentence. He shrugged his shoulders in resignation, recalling the strange animals we had parented over the years, from hairless baby flying tree squirrels, to newborn baby brown bats.

Over the course of our marriage, we had raised over 375 birds, almost every species of chicken, duck, goose, pheasant, turkey and quail. Although we had rehabilitated many wild birds, we had no experience with raptors.

The first few days "it" was fed a mixture of warm bottled water, vitamins and honey for rehydration and energy. The little bird was kept in an enormous straw basket full of soft, sanitized, spanish moss, leaves and twigs. A recreation of its natural nest. A towel was kept over the top of the basket, and the baby was undisturbed except for feedings. Our little orphan went everywhere with us, and was well-fed every two hours, 24 hours a day. Steve would give me that LOOK when the alarm clock went off in the middle of the night. The LOOK that says, "Why couldn't she adopt a goldfish?" But, he didn't say anything.

Soon the newcomer graduated to a mixture of wet, canned catfood, honey, bottled water and vitamins. "It" was growing like crazy, but still no identifiable markings. And, "it" was still ugly. Really ugly.

"In some parts of Ireland, an owl entering the house is killed at once, for if it flies away, it will take the luck of the household with it." - The Encyclopedia of Superstitions

After work every day, we carried the big basket, and our little feathered friend out into the woods behind our home. There, on five acres of natural, wooded land bordering a tidal marsh, sits a large wooden deck. This deck is overhung with giant water oaks, dripped in moss, and ancient cedars. At the end of the sizeable deck, a walkway leads to an old houseboat tied off to surrounding wooden pilings. This is where we would take the baby bird and perch it on a long, low-hanging branch over the deck. At first, the little bird didn't grasp the branch very well and ended up hanging upside down, like a bat, until we set it back upright. The brancher hadn't mastered the art of tree sitting yet. 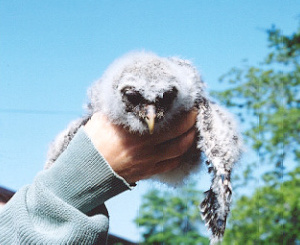 Soon, it developed a vise-like grip on the perch and quickly gained its balance. Once on this natural perch, free and out in the open, the silly bird would dance from side to side, and do that funny, circular, inquisitive head movement. "It" loved being outdoors, and became very alert, watching and responding to everything around. No fear. Only curiosity. Dancing shadows, insects, lizards, and other birds fascinated the nestling.

After a few warm summer hours of freedom, we would put the big basket up to the limb, and the baby would hop in of its own accord. This became a daily ritual. After play time, came feeding time, followed by nap time.

The little bird was carried inside the houseboat, where I would pay a CD, "Loon Lake". The music was very calming for the baby, and after being fed "it" would fall asleep to the sound of loon calls and burbling water. This became a favorite pattern for the bird and I. Not really sure who enjoyed it more.

Steve considered playing music for a bird cuckoo. He would give me that LOOK. The LOOK that says.."She may be crazy, but at least she's not dangerous." But, he didn't say anything.

It was on one of these forays to the houseboat that the bird named itself. A fishing trip had been planned, and a bucket of live squirmy, mud minnows, freshly retrieved from the minnow trap off the back of the houseboat attracted the bird's attention. The little bird became so excited, it almost fell off its tree perch. Steve picked up a slippery minnow and held it out. The minnow was snatched out of his hand and went straight down the birds gullet bones and all. "It" loved live minnows!! 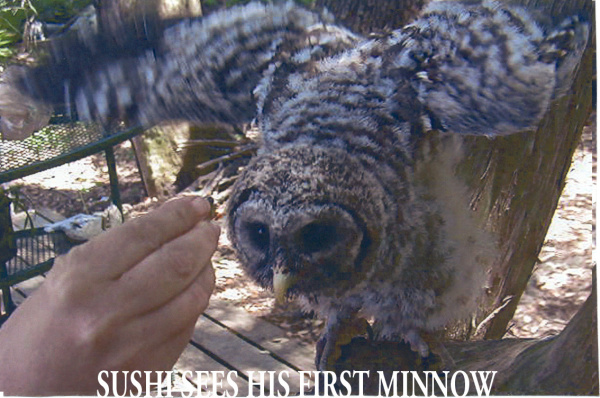 After gorging itself on five fat minnows, Steve dubbed it "SUSHI", and the tree perch forevermore became Sushi's Tree.

"In Germany, a charm against the terrible consequences of being bitten by a mad dog was to carry the heart and right foot of an owl under the left armpit." - The Encyclopedia of Superstitions 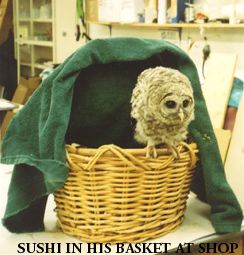 It was very difficult not to pet Sushi. The bird was never allowed to perch on a shoulder, and was only handled perched on a glove when he had to be moved. This was not a pet. This was to be a wild bird. In the meantime, while Sushi was still a helpless baby, (a brancher), he had to go everywhere with us.

At sunrise every morning, Sushi went to work with us at our upholstery shop. There he would sleep the day away in-between frequent feedings of live minnows and canned catfood. In no time Sushi could expertly eat catfood out of a spoon. All of our employees would take turns feeding him. He was always hungry.

In between his naps, Sushi would hop up on the edge of his big basket on the countertop, and there he would sit, watching everyone with that funny circular head motion. He was an unusually quiet bird, as long as he had a full tummy.

The silver ball of fluff began taking on color. Now there were distinct, beautiful, striking, barred feathers popping out of the down. The new feathers were quite lovely, but the bird was still ugly because he was molting. 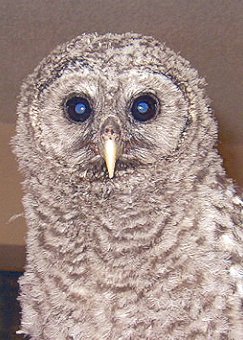 By now, we were sure this was an owl, but a brown-eyed owl? His eyes had remained the color of dark chocolate with big black pupils. The eyes were mesmerizing. Sushi didn't mind staring directly at you for hours. It is unnerving to gaze into the eyes of an unblinking owl. It seems as if you could look right through to another world if you stared long enough into those deep, dark pools.

Once Sushi's feathers came into full bloom, we were finally able to identify him through pictures on The Owl Pages. Sushi was one of only a few brown-eyed owls in Florida. Sushi was aBarred Owl, species Strix varia. Also known as the Swamp Owl. No wonder he was so happy in our back yard. It was the perfect habitat.

As I researched owls, I was struck by the superstitions, fear and folklore surrounding these birds. On one hand they are considered as representing great wisdom, helpfulness and having the gift of prophecy. On the other hand, they were considered evil harbingers of death, destruction and ill omen.

It was hard to believe that our charming little owlet had once been hated, feared, killed, and even eaten over a lot of superstitious nonsense. If Sushi was a messenger of ill omen, it was because he arrived shortly before September 11th 2001. But, he was also a source of many hours of entertainment and enjoyment for a lot of people, both old and young.

"The custom of nailing owls to barn doors to ward off evil and lightening persisted into the 19th Century in England" - Man, Myth & Magic