There's an Owl in the Chimney

Submitted to The Owl Pages via email:

Two weeks ago today, I had been hearing scratching on the damper in my fireplace for two days before this, I finally got the fireplace cleared out enough for me to open the damper and look up. Guess what I see.... RIGHT! a very angry owl who hadn't had coffee yet. 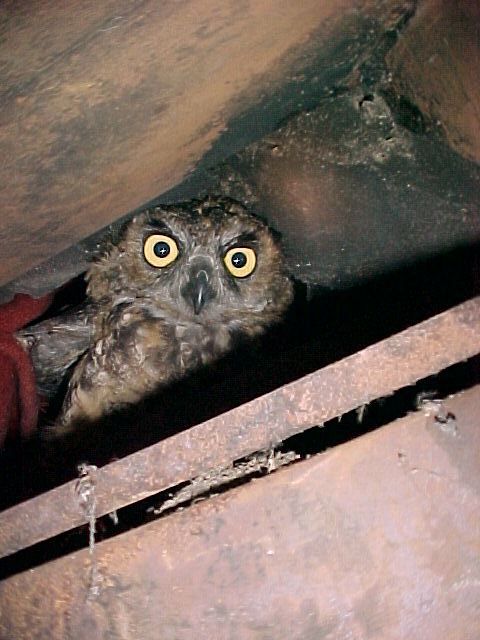 Call me an idiot... *okay, yer an idiot* but it took me three days to figure out it wasn't a Barn Owl.. even though they're camped out in the palm tree out front.

The moment I figured out I had that in my chimney I did what any normal human being would do. Pick up the phone and call animal control.

You know what all of them told me? "Oh we dont do that sort of thing.. but here's a few numbers you can call and maybe they can help." Nine chances out of ten, I already had the numbers.

The red splotch down the one corner of the picture is a blanket. We dropped it down the chimney so he could try and get a talon on it and pull himself up. That's when I got t he picture. Now.. here's the FUN Part.

I showed the picture to some of my Falconer friends and got a big shock. That wasn't any ordinary owl... It's a Great Horned Owl. *chuckles* It had been in there for 6 days without food or water and it took the combined efforts of a friend with a pool skimmer, a stuffed glove on a stick, and me nuddging said bird up so that it could get free.

Well, the moment he got loose of the chimney, he was gone. He flew off and I'm hoping he got a well deserved dinner that night. No thanks to any of the agencies that are SUPPOSED to be helping with stuff like this. *sigh*