Friends with a Spotted Eagle Owl

I am from South Africa and in April 2007 made friends with a Spotted Eagle Owl that showed up on our farm (most probably it was rehabilitated by someone). The owl got injured and I kept it inside for a couple of months until it was well again. During this time our one old cat found out that no other cats are allowed in my study where I kept the owl and she moved in. I allowed this because she has never in her life caught a bird or mouse and was not interested in the owl at all.

During this period the owl got used to her and they regularly ate steak out of my hand together. Once the owl was OK again I let it out, but it now comes and sleeps inside during the day, hunting freely at night. At the moment I have another injured owl that he adopted and feeds regularly (about 2 rats an evening).

The other night I was working late in my study when the owl came in with a rat. I presumed that he was going to feed it to the injured owl, but much to my surprise he flew towards the cat that was sitting on the sofa and tried offering the rat to her. Fortunately I was lucky enough to be able to take a couple of pictures which I include here. 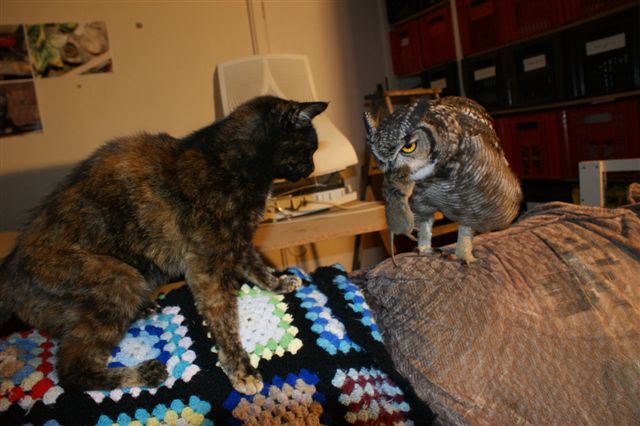 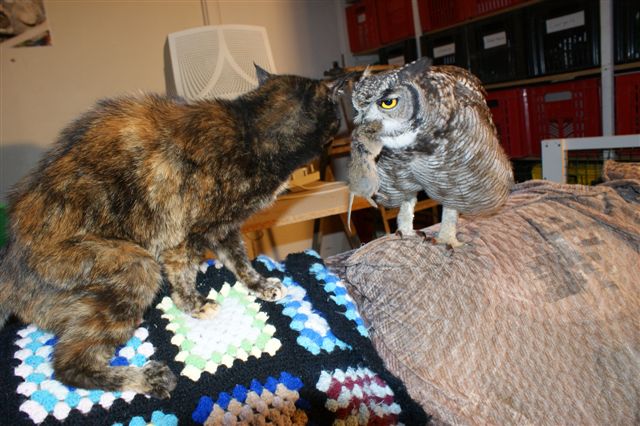 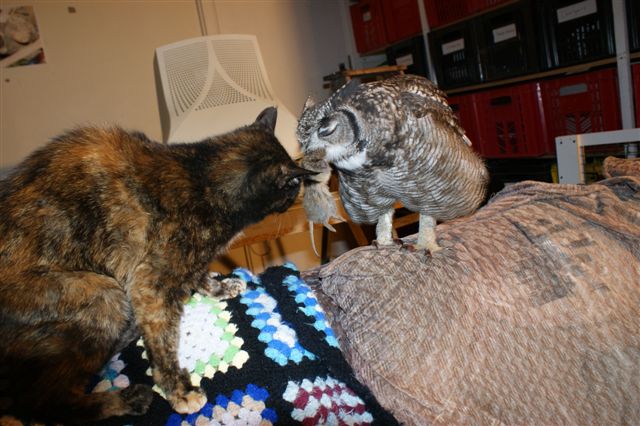 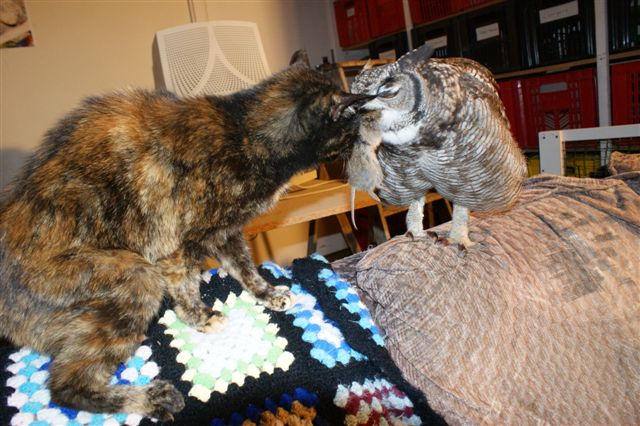 I could only find one other instance where an owl befriended a cat, but I could nowhere find a picture or anything about an owl bringing a mouse or rat to a cat. Unfortunately for the owl, the cat just sniffed at the rat as she has never eaten something like that before. The owl is however aggressive towards all other cats and will even swoop down and attack them if they come to close to his nesting box in the tree. He however accepts this cat even near his nesting box.

My owl feeding the injured owl that I told you about above. (2 broken legs and a damaged wing estimated to be 1 year old). 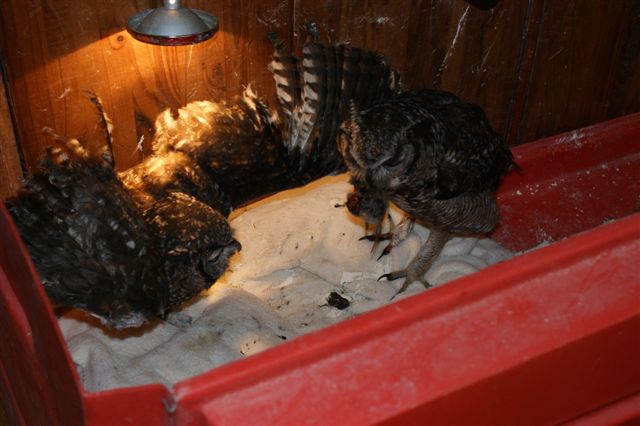 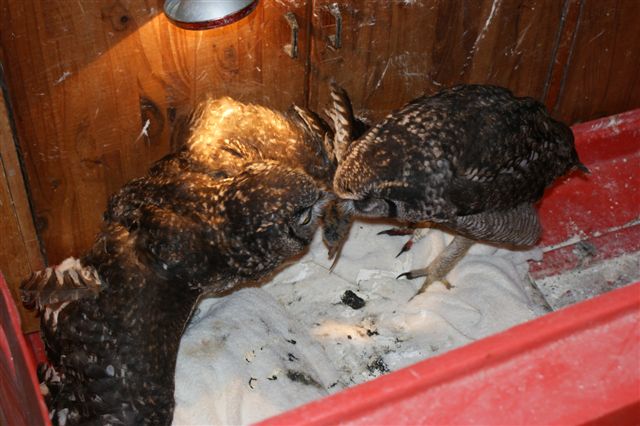 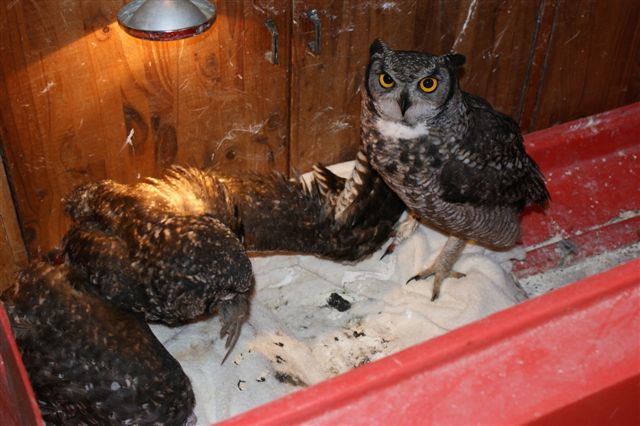 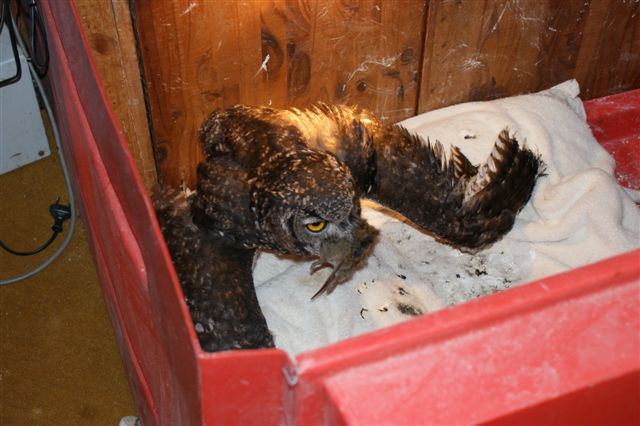 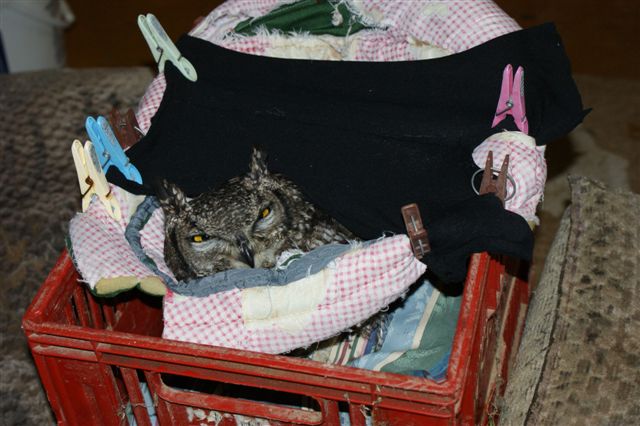 The owl bringing a mouse, and later on a bat to my wife while she is sleeping! 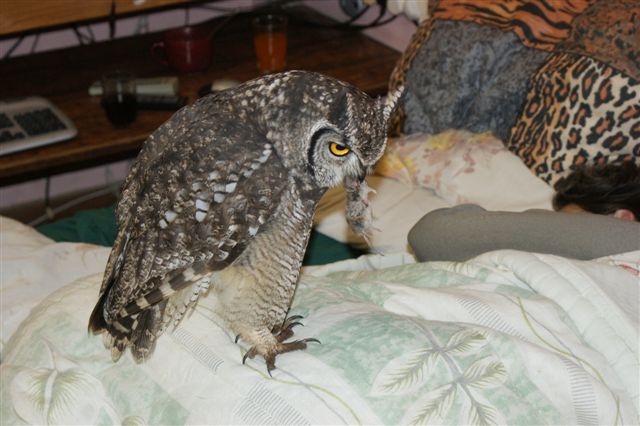 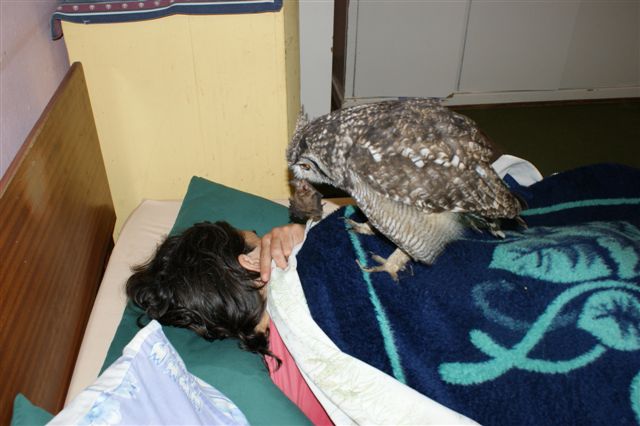 An injured crow that he made friends with for about 3 days until the crow got better and started making a terrible nuisance of himself. The crow was released after about 3 months and hooked up with another crow on the farm and is now living freely, and will most probably start breeding this season. 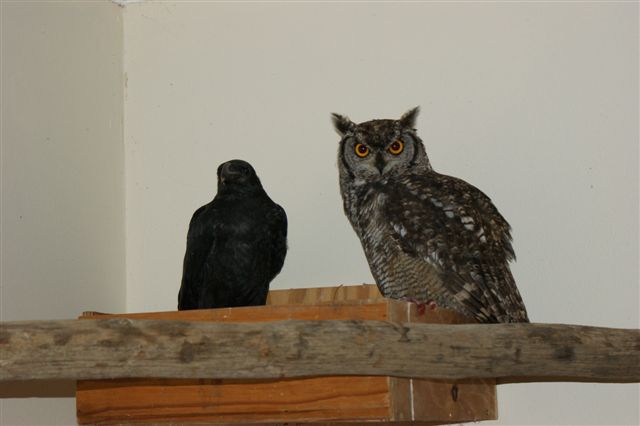 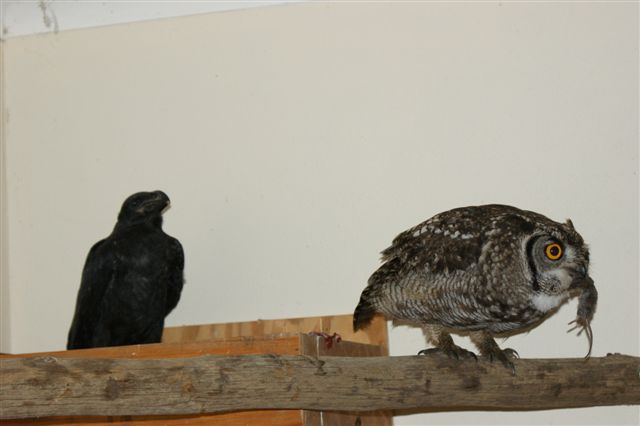 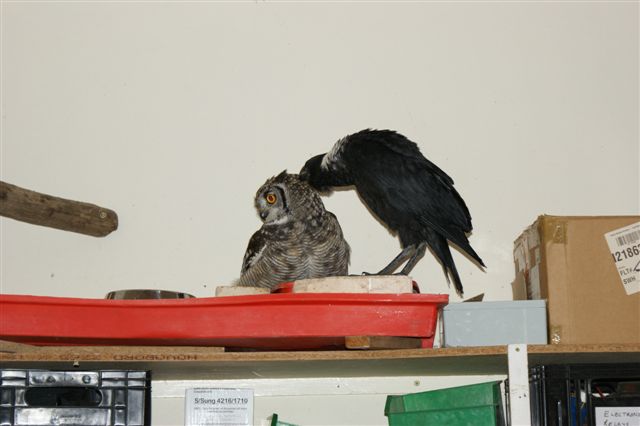 A young owlet that he helped raise and that we rehabilitated successfully. 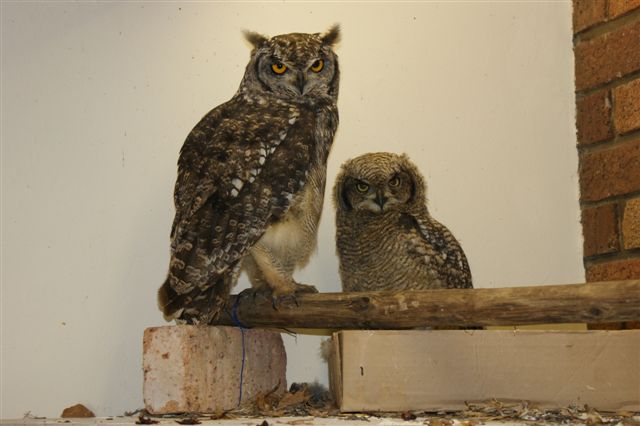 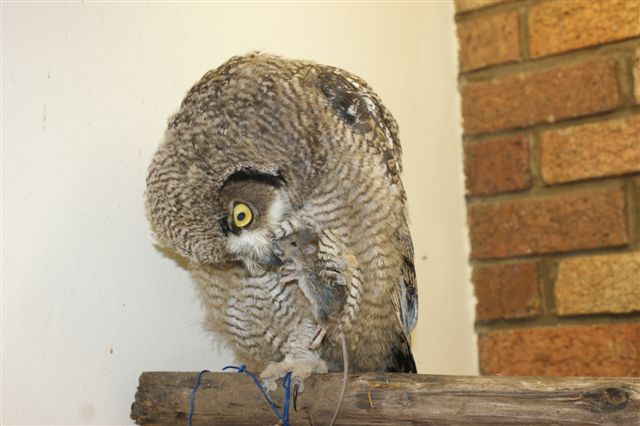 A young injured marsh owl that I am busy rehabilitating. He has not made real friends with the marsh owl as it is actually quite a cheeky bird, but does tolerate him. 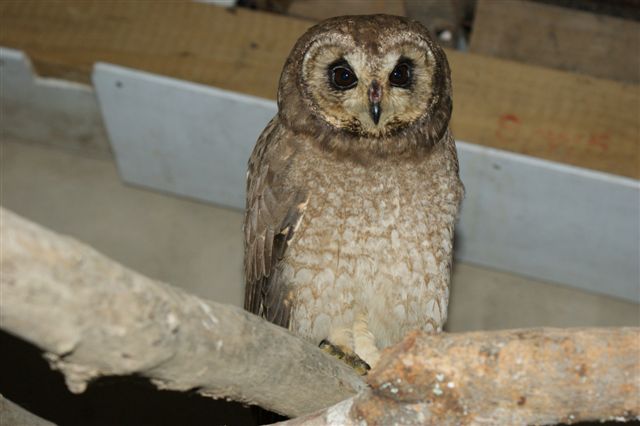 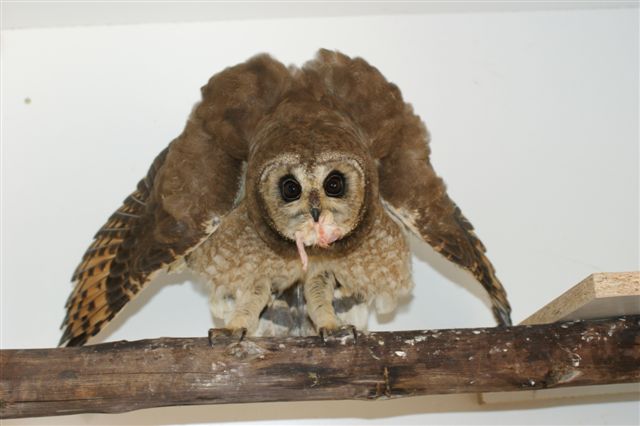 What makes my owl so interesting to me is that it is free to come and go as it pleases and lives as close to a natural life as possible. I have in no way tried to train him or force myself onto him and everything that he does comes natural. I am not in favour of keeping birds, or any other animal for that matter, caged up and release all injured birds if at all possible. 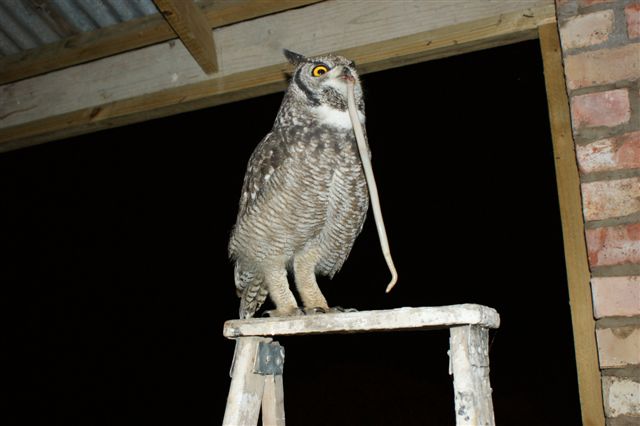 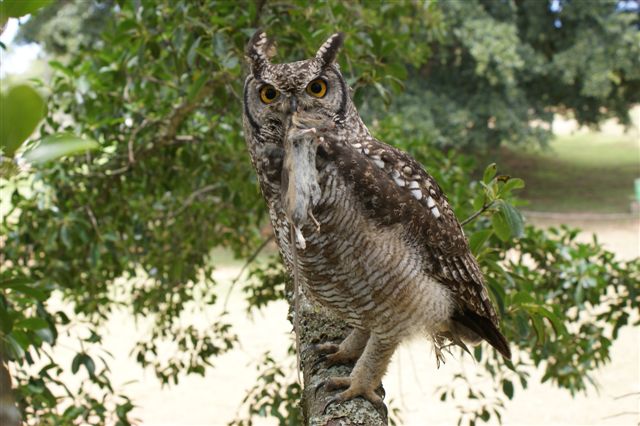 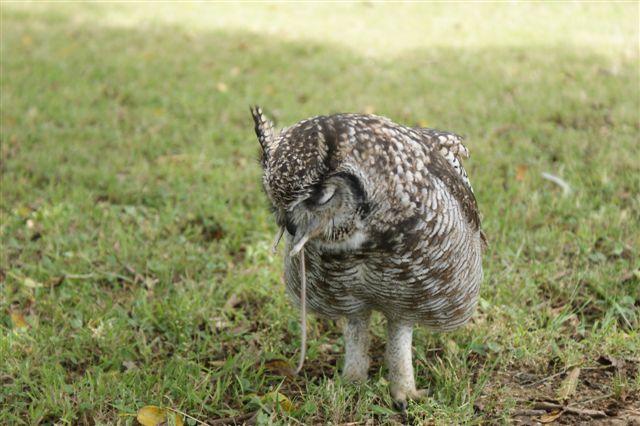 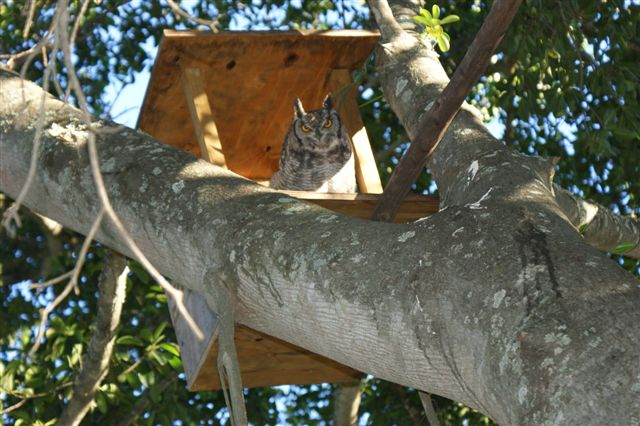 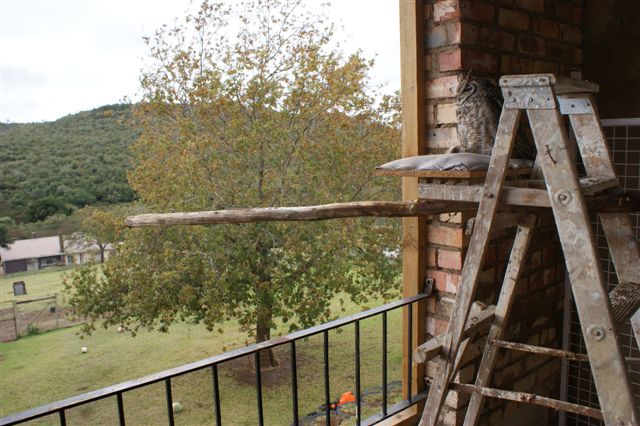 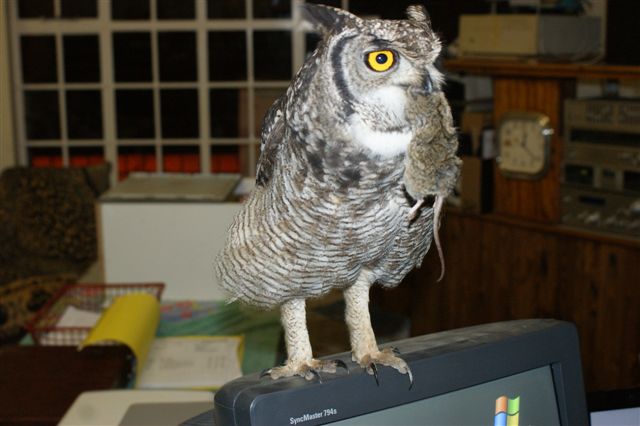