Chapter 4 - What to Feed a Raptor? 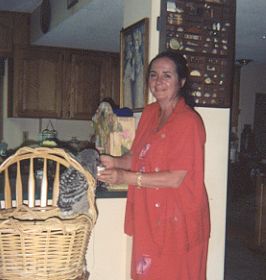 Our main concern had to be the owl's diet. Many owls brought to veterinarians, or rehabilitation facilities, are brought in suffering from malnutrition. Sushi certainly didn't look malnourished. But, we had to be sure he had the proper diet in captivity, or we could do him serious harm.

Fearing that I was a bad "mommie", I obtained the proper vitamins recommended for owls. Next, a small white mouse was purchased from the pet store. We were supposed to dip this mouse in the vitamins and feed it to the owl. Although I knew this day was coming, I didn't have to like it! It was live food time. I took the newly purchased mouse, with trepidation, to the shop for Sushi's first live feeding.

Of course, I fell in love with the charming little mouse, with its pink eyes and wiggly nose. It was so little and so cute how could anyone feed it to an owl? Steve gave me that LOOK. The LOOK that said, "You're the one who wanted to raise a carnivorous bird." But, he didn't say anything.

Steve promptly picked up the mouse and plopped it unceremoniously into a large cardboard box. While I covered my eyes and cringed, the owlet was set on the side of the box. Everyone waited for the owl to get the mouse. Nothing happened! Although Sushi found the mouse interesting, and watched it with curiosity, he didn't eat it. Didn't even attempt to eat it. Sushi thought we put it there to entertain him while he patiently waited for his catfood, and live minnows.

That confirmed it. I was a bad mother. Sushi didn't know that a mouse was food. I couldn't bring myself to put the mouse in a blender and force feed the bird a bloody mess. So, the tiny mouse was named "Dinner", and became the shop mascot, until it escaped and lived happily ever after, never having to live up to its name.

My worries increased. Was I harming the owl? Sushi couldn't live in the wild if he didn't know how to hunt, kill, and eat live food. Canned catfood doesn't run wild in the woods. Friends would tell me the owl would never fly, or learn how to hoot, because I couldn't teach it like its mother could.

There was so much I didn't know about raising an owl. The first time he produced an owl pellet, I thought he was dying. An owl pellet is regurgitated matter, usually including bones, skulls and fur. Sushi made these horrible hacking noises, and suddenly an oblong ball of "yucky" stuff appeared in his beak. He calmly dropped this glop on the floor. Steve gave me that LOOK. The LOOK that says, "Messy, isn't he?" But, he didn't say anything.

The next food-stuff attempted, as recommended in my continual search for owl knowledge, was raw beef heart. The butcher looked at me strangely. Apparently, he didn't get a lot of request for beef hearts. He handed me a huge, heavy package, wrapped in white butcher paper and already dripping blood.

The beef heart was bigger than the owl! I rushed home and unwrapped the heart. It was disgusting! It was enormous, blood red, and hard as a rock. The owl was set on the edge of the kitchen counter where he watched the proceedings with his circular head motion. Out came the largest, sharpest carving knife in the drawer, and an oversized carving fork. Attempting to carve the heart was like attempting to carve a stone! It slipped and went skittering across the counter, leaving a trail of blood. I attacked it again. This time the skin was pierced, and crimson blood spurted out everywhere. I was splattered with blood, the walls were splattered with blood, and the owl was splattered with blood. Sticky red rivlets were running off the counter top. Every time I tried to carve the heart it would squirt some more.

The owl was having a grand time watching this fiasco. By now Sushi was beginning to talk in owlese. He had quite a variety of sounds, from grumbles to clicks, hisses, and even what sounded like a little chuckle. Today, he was making his chuckling noises.

Finally, I managed to shave a little of the hard muscle off the reluctant heart, and proudly presented it to the chuckling bird. Sushi ate one little piece, picked at the rest, then completely turned his back on it, refusing to eat. But, he was still chuckling. So much for the beef heart.

About the time Sushi turned his back on the bloody beef heart, Steve arrived home from work. He took one look at the gory mess, and started laughing so hard, he collapsed in the recliner. "O.K., who did you murder?" He could barely squeeze out the sentences between his guffaws. "It's o.k., you can tell me. You can plead insanity. I'll testify to that! We'll get you a good attorney, and I'll visit the asylum often!" Tears of mirth were running down his face.

I threw a chunk of bloody beef heart at him, and it made a warm, indelible splat on my peach wall when he ducked. That only made him laugh harder.

"An awareness and understanding of the deep, complex perceptions of owls in the past may help support efforts to protect those species today." - The Owl Pages - Owls in Lore and Culture

Regardless of my failure with the beef heart, Sushi was growing rapidly. Our ugly duckling had finally turned into a beautiful, but ravenous swan. A fortune was being spent on live mud minnows, vitamins, canned catfood and occasional mistakes like the beef heart. Sometimes we had minnows in our minnow trap, but most of the time we didn't. That meant a trip to the bait shop on a regular basis for live minnows.

Almost every morning, on the way to work, I would stop by the bait shop to buy a bag of live mud minnows to go. The lady who ran the shop always asked about the owl. We joked about fast-food for an owl.

One particular morning, while on my minnow mission, I decided to take Sushi inside the bait shop and introduce him to the lady. She wasn't there. Instead, her husband was outside the building retrieving live shrimp for a customer from the big bait tank.

As I carried the owl into the bait shop inside his big open basket, I noticed a cooler on the floor to my left full of tiny, live fiddler crabs. The little crabs were scrabbling about in the sawdust floor of the cooler. About the time the owner walked back in the door... Sushi took his very first flight!

Sushi took off from the basket, landed smack-dab in the middle of the cooler full of fiddlers, and proceeded to tap dance all over them. Sushi was grabbing talons full of fiddlers, stuffing them into his beak, and swallowing them whole! He was garbling delightedly between gulps.

The owner yelled, "Hey!!!", to stop the owl from gobbling down all of his profit. But, it didn't phase Sushi, who seemed to be having a grand time doing his tap dance. Although the wife knew about the owl, the husband didn't. What a shock it must have been to walk into his own business and find a large owlet inside a cooler eating his hard gained fiddlers. 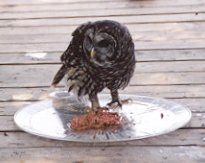 Sushi had to be physically removed from the cooler by gently grabbing him with both hands around his wings and lifting him back into his basket, still with two talons and a beak full of squirming fiddlers. The owner had to smile. He was paid much more than the fiddlers were worth, and I added a new "to go" item to my shopping list with them. Sushi had a new food source... fresh fiddlers. The owl had never seen a live fiddler crab. Yet, his instinct told him this was food. He did what would come natural in the wild. Relief! I didn't have to teach the owl everything. There are some things they just know. The owl was teaching me!

Even with this new food source, the concern was that the owl might be undernourished. So, Sushi was constantly tried on new food items. Chicken livers, giblets, and beef liver were met with the same distain as the mouse and the beef heart. Here was an owl that didn't like the taste of blood. My worries continued.

"If a habitual drunkard was given owl's eggs broken in a cup, he would henceforth detest strong drink as much as he formerly loved it." - The Encyclopedia of Superstitions