It was hard to do. Sushi was taken out to Sushi's tree. This time when he moved from tree to tree, we didn't retrieve him. Quietly we sat and watched as Sushi practiced flying and investigating the world around him. That night at dusk, we went to the house and left Sushi out in the woods for his first night in the wild. 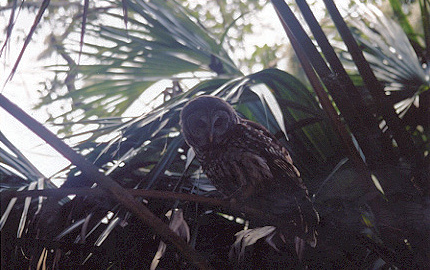 At 3 A.M., I was tiptoeing through the dew damp grass in my nightie, with a flashlight, out to the houseboat. Momma was worried about the owl. Sushi hadn't moved from the branch where we last saw him. He was softly making his crying sounds. "Weeeeooooooooh! Weeeeeooooooh!" Sushi was scared! But, he didn't come down from his branch. When I called up to him to let him know I was there, I startled a giant Woodstork who was nesting quietly in the very top of the tree. With a bloodcurdling scream, the Woodstork took off across the marsh like a prehistoric pterodactyl. All I had succeeded in doing was frightening the owl more.

I stumbled back to the house, wet with dew, and climbed back in the warm bed. I had tried not to wake Steve. But, Steve gave me that LOOK. I can feel the LOOK in the dark. The look that says, "I married a crazy woman, and now I have to live with my mistake." But, he didn't say anything.

In the morning I left Sushi a bowl of catfood. I kept leaving work and bringing him treats. But, for three days, to our knowledge, he stayed right there on the same branch and didn't eat. On the fourth morning of being late to work, I stood under the tree for half an hour waving a big, fat mud minnow in the air. Sushi finally came down and ate the fresh minnows swimming in his bowl, cussing me in owlese the whole time.

Sushi hadn't hunted. He was still dependent upon us for food. Once again, I felt like a bad mommie. It became a regular practice for us to leave tid-bits of food on the deck for the owl when we went to work. At least now he was eating the food we left. Everything was going alright. The owl was living free, but it wasn't happy.

Birds attacked the owl regularly, now that he lived outside. He became more alert and very watchful for attacks. Sushi became more aloof from us. He was mad at us again. The owl would just sit up in a branch and stare morosely at us. He stopped garbling his owl talk.

Dejected, I would go back to the house, dripping wet in my yellow rain slicker and boots, looking like a depressed and soggy Paddington Bear. Steve would give me that LOOK. The LOOK that says, "She's going to catch pneumonia out there trying to find an owl!" But, he didn't say anything. Steve knew I was suffering. And, he was worried about Sushi, too. We cared deeply for the bird.

Finally, the storm abated. Glorious Florida sunshine was sparkling off emerald wet leaves. That morning I ran outside in my nightie and bare feet calling Sushi. This time, I didn't have to go far. Sushi had left the forest, the houseboat, Sushi's tree and the marsh behind, and was waiting for me in a tree branch just outside the house. He had never ventured to the house before. 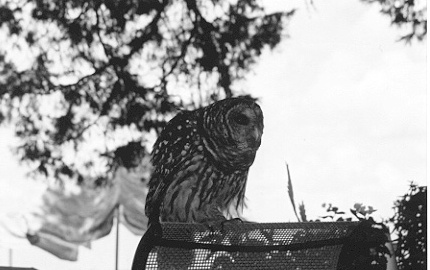 The owl was dripping wet, bedraggled, but very much alive, and very hungry. He was making pathetic garbling noises at me. "Gooobniaaane! Leerrogogmer? Reeeinnnowe!!" I could have shinnied up the tree and hugged the owl. I was so happy to see him alive. Instead, I grabbed a live mouse out of the emergency mouse aquarium in the greenhouse and simply tossed it on the ground below him. Sushi made a graceful swoop and perfect landing on his breakfast. This process was repeated several times. The owl had been perfecting his flying and landing technique in the wild. It was quite impressive. He was elegant and awesome in the air.

Unfortunately, still convinced Sushi had not been able to feed himself in the wild, I turned chicken. No matter how I had promised myself that the owl would stay in the wild, while he was still hungry I lured him back into his pen with a mouse, where I locked the door on him. At least now I knew he was out of the weather, and had food. When I called Steve out to show him the owl was back, he gave me that LOOK. The LOOK that says that says, "I knew she couldn't do it." But, he didn't say anything. Steve just shook his head. But, I saw the relief in his eyes upon seeing the owl alive.

It was "meals on wheels" again for the owl. Back and forth from the shop, to the pet store, to the bait shop. But, Sushi was "safe." That's all that mattered to me at the time.

One afternoon, returning from work, I walked up to Sushi's pen and didn't see the familiar silhouette sitting on the tree perch. The door was still locked. There were no holes in the screen. As I began to panic and run around the yard calling "S O O O S H I!!", I heard that familiar little garble and owl chuckle. Somehow, Sushi had squeezed himself through a little open space in the roof of the chicken house, and was roosting with the chickens inside their pen! That was the last place I would have looked for him.

I rushed across the yard to the pen, expecting to see dead chickens everywhere. Instead, the chickens were milling around on the ground below the now full grown owl... ignoring him. One brave chicken was actually on the roost, way over on the other side, eyeballing this strange visitor. These birds had lived side by side for so long, separated only by chicken wire, they were quite comfortable together. Besides, Sushi had no idea there was a walking smorgasbord at his feet. How was he supposed to know this was food?

Steve had a good laugh when he got home and saw the owl in the chicken coop. There was quite a wrestling match trying to get Sushi out of the chicken pen and back into his own pen. He liked it there with the chickens. The hole in the roof between the two pens was fixed, and everything went back to normal. As least as normal as things can be with an owl in residence.

"The owl's reputation as a bird of wisdom may have arisen through its association with Athene, the goddess of counsel." - E.A. Armstrong - The Folklore of Birds 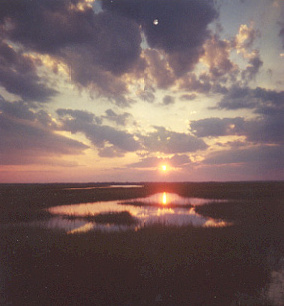 For a few weeks, I remained content that the owl was safe. Then, my conscience began to bother me. Sushi was so beautiful in the wild. If we didn't return him soon, he would be captive for the rest of his life.

Watching the magenta sunset from the houseboat one afternoon, and listening to Loon Lake alone, I finally understood. Even if the owl didn't make it in the wild. It would die free. It would fly free. And, with any luck it would find a mate and make more baby owls. That would never happen in a pen. He wouldn't get the exercise a big bird needs. His wings might atrophy. He might get depressed and stop eating. But, most of all, if he stayed in that pen much longer, he would think he was a chicken!

This time, I really set my heart and mind to freeing the owl. No matter what, I would never pen him again. I was being selfish with his life.

When the announcement was made to Steve, he looked up at the sky and smiled, whispering a little "Thank you, Lord."

"'There goes an owl' was the Athenian saying indicating signs of victory" - Man, Myth and Magic