Dealing with injured or orphaned owls

First aid for injured Owls and birds of prey

If you are to be of any help to an injured Owl, minimising stress must be the first priority. Birds are often killed by shock rather than their injuries. Swift action on your part is a necessity as any delay increases stress. If the Bird actually allows you to approach it to pick it up, then it is likely to be in a very serious state and may be more traumatised by being handled. Don't try to examine the injured bird yourself. This causes more stress for it, and should be left to a trained rehabilitator or Veterinarian.

The following is a step by step guide to what to do if you come across an Injured Owl or Bird of Prey:

Another Important thing is to take note of exactly where you found the Bird, so that it may be returned to the wild in its own territory.

Care of orphaned Owls or other bird of prey

Unfortunately, most "orphaned" Owls and Birds of Prey are mistakenly deemed orphaned - they're actually just in the process of testing their wings. Many young birds disperse from their nests long before they can fly - this prevents overcrowding in the nest as the chicks grow. This is nature's way of helping to minimise any threat to the entire clutch from predators. Many young birds lose their footing during these first explorations and fall to the ground. A grounded chick may look lost and vulnerable, but the chances are its parents know exactly where it is and will continue to feed it. Also, many young birds are quite capable of climbing back into their tree using beaks and talons.

Before doing anything with deserted chick you need to check the following things:

If the answer to both questions is 'No', then just walk away quietly and let nature take its course.

Only ever remove the bird from the area if you are positive it has been abandoned or if it is clearly injured. Seek expert advice immediately and do not attempt to treat or feed the bird yourself. It is all too easy to imprint a youngster on humans, thus rendering it incapable of being returned to the wild.

Here are some links to other websites that have contact information for wildlife rehabilitation.

The The Wildlife Rehabilitation Directory lists wildlife carers in the USA.

Animal Help Now can assist locating a vet or rehabilitation center in the United States. 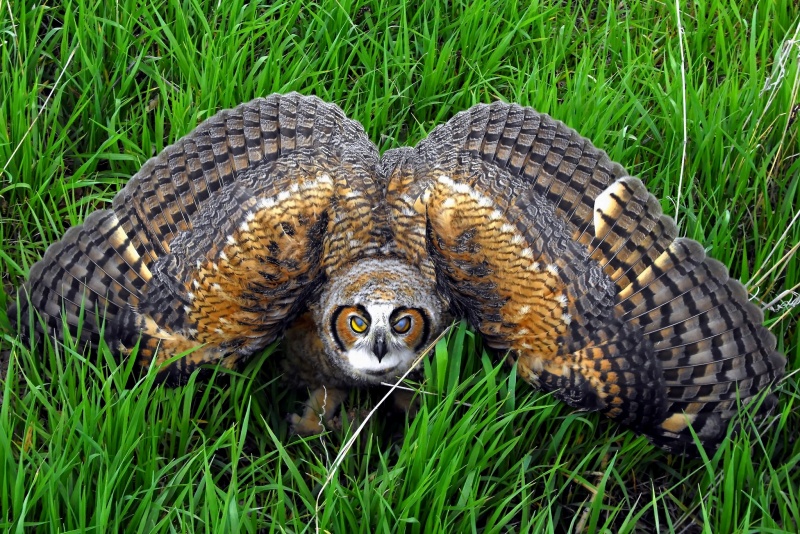 It is normal to see a baby owl on the ground, like this young Great Horned Owl.
Photo © Deanna Beutler