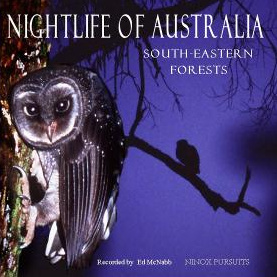 Have you ever heard the "falling bomb" call of the Sooty Owl, the garrulous gurgling shriek of a Yellow-bellied Glider or the infamous "screaming woman" call of the Barking Owl? These calls and many others among the 53 sound recordings of nocturnal birds and mammals on this audio CD will assist you to identify the mysterious night sounds of our forests.

Ed McNabb is a wildlife ecologist with a special interest in nocturnal fauna. He began recording wildlife vocalisations in the 1970's during his long-term study of the Powerful Owl in Victoria's Dandenong Ranges. Whilst in the bush for long hours at night, the many mystery night calls intrigued him and he found the best way to memorise the calls was to record them.

In 1996 he published his popular Nightlife of the Dandenongs tape, which has enabled landowners, biologists and naturalists to identify nocturnal wildlife by their calls around the Dandenongs and beyond.

Over recent years Ed has received many requests to produce the calls on a compact disk, a more friendly medium. His new CD, Nightlife of Australia -South-eastern Forests is in response to these requests and although still focussed on nocturnal calls of The Dandenongs, a number of species from elsewhere along the Victorian Great Dividing Range have been included.