'The Min Min Light: The Visitor Who Never Arrives' by Fred Silcock 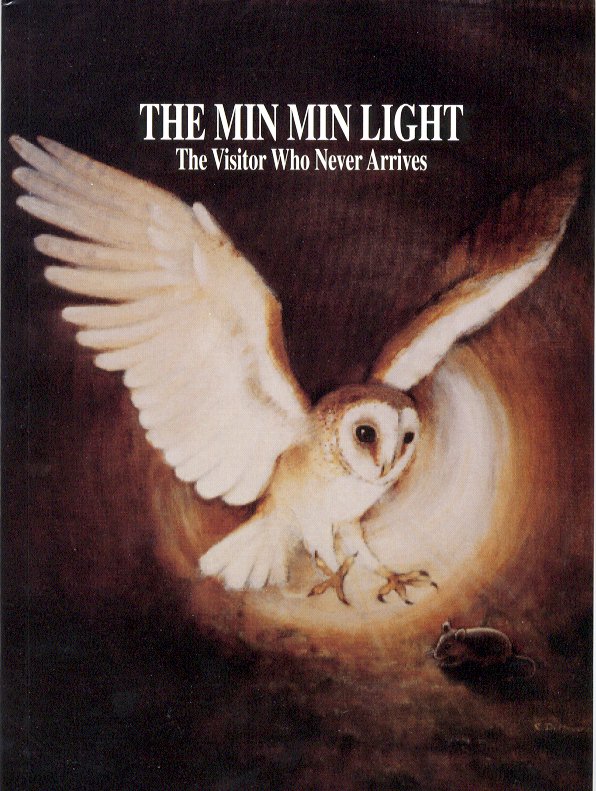 This book is the result of ten years research by the author. The most popular explanations as to the cause of this mystery light are examined and, except for one, found to be unsustainable.

The light exhibits a degree of intelligence. If it has intelligence and is of Earth, it must possess a brain. A brain presupposes flesh and blood, in which case we are dealing with an entity biological in nature.

In a number of rare observations a bird has been seen in association with the light. Some descriptions of the bird identify it as the Barn Owl Tyto alba.

Reports of luminescing Barn Owls have long been on record. The common belief is that such birds have become contaminated by luminous fungi. This belief is discredited by the author who puts forward the case for these birds possessing dermal organs of luminescence similar to those found in many animals capable of making light.

Summary from back cover:

The Min Min Light, the small, bright, dancing night-time light of plains and farmlands, is one of Australia's oldest natural mysteries. It is an ancient light and spoken of in stories from the Aboriginal dreamtime. It seems to be a companion of the earth rather than an object of the skies. But it is a light not only of Australia. It is a light known by many names across Europe. It is the Prairie Light of North America and the Jack o’ Lantern or Will o' the Wisp of Great Britain. Wherever it is found, and by whatever name, its character remains the same, seeming to defy those who would try to investigate it, disappearing one moment, reappearing the next, floating, hovering and at times silently speeding away, never allowing the follower to catch up.

The Min Min Light : The Visitor Who Never Arrives
Self Published 2003, 85 pages - 10 colour plates (not of lights)